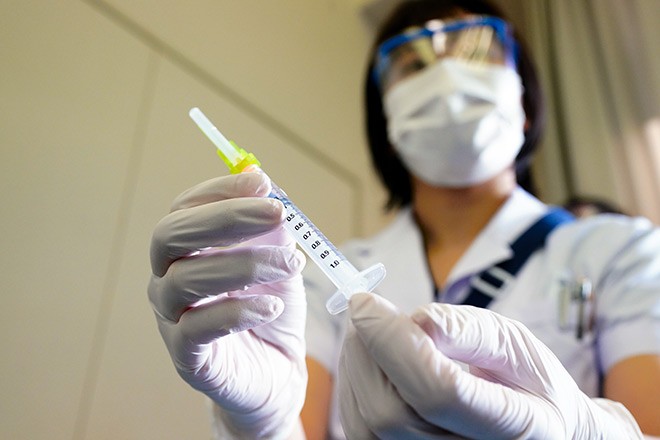 A health care worker prepares to administer a booster shot in Hachioji on the outskirts of Tokyo in December. (Asahi Shimbun file photo)

Japan from mid-October plans to administer a new type of vaccine in booster shots designed to protect people from the Omicron variant of the novel coronavirus, the health ministry said.

The “bivalent vaccine” will be made available to people who have received two doses of existing vaccines, starting with elderly people and those with underlying health conditions, according to the Ministry of Health, Labor and Welfare.

The central government, working together with local governments, will start preparations to eventually provide bivalent vaccine inoculations to the entire population.

The policy to use the new vaccine was approved at a ministry meeting on Aug. 8.

The ministry, based on the opinions of an advisory panel on responding to COVID-19, also decided to issue a recommendation in early September at the earliest that parents should make utmost efforts to vaccinate their children aged 5 through 11 under the Preventive Vaccination Law. But the ministry will not make such inoculations compulsory.

The bivalent vaccine is designed to defend against BA.1, an Omicron subvariant, and an early strain of the novel coronavirus.

Pfizer Inc. and Moderna Inc. have been developing their versions of the bivalent vaccine.

Trial runs reportedly showed that the new vaccine is more effective than existing vaccines in producing neutralizing antibodies that can defend against an array of Omicron variants.

The U.S. companies said their new vaccines also offer better protection against BA.5, the Omicron subvariant that is now the dominant strain in Japan.

According to the results of clinical trials, the ministry estimates that the inoculation interval for the bivalent vaccine is about five months.

Pfizer on Aug. 8 applied for Japanese government approval for its bivalent vaccine. If granted regulatory approval, the new vaccine could be imported starting in September, according to the ministry.

Ministry officials said they expect no problems in securing enough doses of the new vaccine for all people who have received two shots of existing vaccines.

Japan is currently providing booster shots for certain segments of the population, including second boosters for health care workers and those 60 or older.

Some members of the expert panel urged the ministry to advise the population not to pass up the available vaccines because of the anticipated arrival of the new vaccine.

“The existing vaccines now provide a certain degree of protection against the spread of the novel coronavirus,” one of the members said. “People should be fully informed not to shun them when they come at hand.”

The ministry approved inoculations of children 5 through 11 after it became clear that current types of vaccines can help to defend this age group against the Omicron family to some extent.

Data presented to the panel meeting on Aug. 8 showed that children in this age group have a low likelihood of developing serious symptoms during the two months after their second doses.

In addition, about 80 percent of infected children could avoid hospitalization if they are vaccinated, the panel said.

The panel also said no signs have been detected that raise concerns about the safety of the vaccines as long as their possible side effects are monitored.

Many panel members endorsed the ministry’s recommendation to vaccinate this age group, noting that the number of infections among children has increased in recent months, and some are being listed in serious condition.

Children, in fact, represented a significant percentage of new COVID-19 cases in July, according to the ministry.