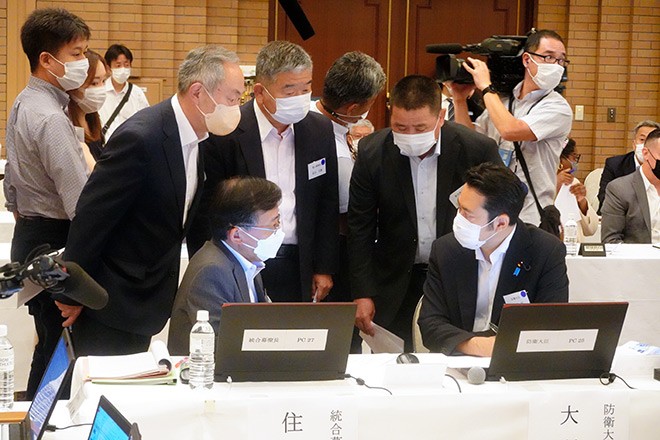 Former Self-Defense Forces senior officers, acting as chiefs of staff, speak with Taku Otsuka, a Lower House member who is acting as defense minister in a simulation where there is an emergency in Taiwan, in Tokyo’s Shinjuku Ward on Aug. 7. (Naoki Matsuyama)

While China is increasing its military pressure around Taiwan, Japanese former defense minister and former senior officers of the Self-Defense Forces simulated the country's response in the event of a Taiwan emergency.

The simulation, hosted by the Japan Forum for Strategic Studies, a think tank, was conducted for two days through Aug. 7 at a time when China is conducting its large-scale military exercises.

The simulation began last year to help create ideas for policy proposals. This year’s event was planned before the latest Chinese drills.

They examined several scenarios on how the Japanese government should respond should the situation progress from peacetime to a possible crisis in the region.

They set the simulation in 2027 and assumed that China and Taiwan are politically unstable, with growing public frustration in China over President Xi Jinping’s regime and an intensifying independence movement in Taiwan.

Participants on Aug. 6 simulated a situation escalating rapidly from a so-called “gray zone” that is neither a contingency nor peacetime.

Under the scenario, many fishing boats from mainland China headed for the Senkaku Islands, which Japan controls but China claims, and collided with a Japan Coast Guard patrol vessel.

In Taiwan, system failures and other problems occurred at banks and other organizations, while anti-government forces staged large-scale protests in Taipei. Then, China launched missile attacks on Taiwan.

In this simulation, participants held NSC meetings each time a situation developed. They discussed responses, including when to call on the SDF.

They also simulated coordination efforts with the United States and staged meetings between foreign and defense ministers, as well as leaders.

As a result, the mock NSC recognized the Senkaku contingency as an armed attack against Japan.

It categorized the Taiwan contingency as an armed attack against a third party resulting in threatening Japan’s survival, which allows Japan to partially exercise the right of collective self-defense.

On the second day, participants discussed two scenarios: first, how to transport Japanese nationals, protect them and deal with evacuees; and second, how to respond to China's nuclear threat and its use of nuclear weapons.

In the first scenario, the Defense Ministry requested the government to promptly define the situation.

However, Onodera, acting as prime minister, said if Japan makes such a declaration, relations with China could collapse, making it difficult for the Foreign Ministry to discuss the safe transport of Japanese nationals.

“A key issue was how to safely evacuate Japanese nationals living abroad,” Onodera told reporters after the event.

He said the simulation will continue to be discussed.