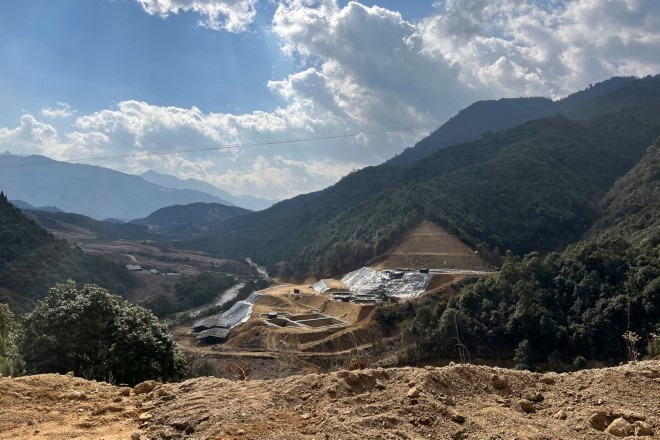 In this early 2022 photo provided by Global Witness, a new rare earth mine is dug into the side of a mountain in Pangwa, Kachin, Myanmar. (Global Witness via AP)

The birds no longer sing. The fish no longer swim in rivers that have turned a murky brown. The animals do not roam, and the cows are sometimes found dead.

The people in this northern Myanmar forest have lost a way of life that goes back generations. But if they complain, they, too, face the threat of death.

This forest is the source of several key metallic elements known as rare earths, often called the vitamins of the modern world. Rare earths now reach into the lives of almost everyone on the planet, turning up in everything from hard drives and cellphones to elevators and trains. They are especially vital to the fast-growing field of green energy, feeding wind turbines and Tesla engines. And they end up in the supply chains of some of the most prominent companies in the world, including General Motors, Volkswagen, Mercedes, Tesla and Apple.

But an AP investigation has found that their universal use hides a dirty open secret in the industry: Their cost is environmental destruction, the theft of land from villagers and the funneling of money to brutal militias, including at least one linked to Myanmar’s secretive military government. And as demand soars for rare earths along with green energy, the abuses are likely to grow.

“This rapid push to build out mining capacity is being justified in the name of climate change,” said Julie Michelle Klinger, author of the book “Rare Earths Frontiers,” who is leading a federal project to trace illicit energy minerals. “There’s still this push to find the right place to mine them, which is a place that is out of sight and out of mind.”

The AP investigation drew on dozens of interviews, customs data, corporate records and Chinese academic papers, along with satellite imagery and geological analysis gathered by the environmental non-profit Global Witness, to tie rare earths from Myanmar to the supply chains of 78 companies.

About a third of the companies responded. Of those, about two-thirds did not or would not comment on their sourcing, including Volkswagen, which said it was conducting due diligence for rare earths. Nearly all said they took environmental protection and human rights seriously.

Some companies said they audited their rare earth supply chains; others didn’t or required only supplier self-assessments. GM said it understood “the risks of heavy rare earths metals” and would source from an American supplier soon.

Tesla did not respond to repeated requests for comment, and Mercedes said they contacted suppliers to learn more in response to this story. Apple said “a majority” of their rare earths were recycled and they found “no evidence” of any from Myanmar, but experts say in general there is usually no way to make sure.

Just as dirty rare earths trickle down the supply chains of companies, they also slip through the cracks of regulation.

In 2010, Congress required companies to disclose the origin of so-called conflict minerals--tantalum, tin, gold and tungsten. But the law does not cover rare earths. Audits are left up to individual companies, and no single agency is held accountable.

The State Department, which leads work on securing the U.S. rare earths supply, did not respond to repeated requests for comment. But experts say the government weighs the regulation of rare earths against other green goals, such as the sales and use of electric vehicles. Rare earths are also omitted from the European Union’s 2021 regulation on conflict minerals.

The United States offshored its rare earths mining to China in the 1980s because of environmental and cost issues. China’s leader at the time, Deng Xiaoping, declared rare earths China’s answer to “oil in the Middle East.”

For decades the industry prospered. Then, stung by public criticism, officials in Beijing declared war on the country’s dirty industries - including rare earths mining.

As mines in China shuttered, ore prices rose. Thousands of miners streamed across the border to neighboring Myanmar, home to some of the world’s richest deposits of what are known as heavy rare earths.

“It reminds me of the European colonial attitudes towards Africa,” said an industry analyst, speaking on condition of anonymity to avoid damaging ties with the Chinese government. “You just can’t be relying on third-world-type mining practices in a dictatorship like Myanmar. It’s not sustainable.”

Guo, a Chinese miner who did not want to use his full name to talk freely, recounted primitive working conditions in Myanmar, including clouds of mosquitoes and nights spent burning logs in ramshackle cabins. The miners dug hundreds of feet deep with shovels and their bare, callused hands.

“I’m only responsible for digging the mountain up and selling it,” Guo said. “The rest is none of my business... We just see if we can make money. It’s that simple.”

There is a name for what Myanmar has become: A “sacrifice zone,” or a place that destroys itself for the good of the world.

The sacrifice is visible from the air, in toxic turquoise pools that dot the landscape covered by mountain jungles just a few years ago. Since rare earth clays in Myanmar are soft and near the surface, they can easily be scooped into these pools of chemicals. Satellite imagery commissioned by Global Witness showed more than 2,700 of these pools at almost 300 separate locations.

A villager who lives along a river some 15 miles from the center of the mining sites said his wife used to catch and sell fish. Now the few they can catch make them ill.

“There are no fish along the creek, not even small fishes,” said the villager, who asked to be anonymous for his safety. “Everything went extinct.”

Militias are rampant in these northern forest frontier areas, including at least one tied to the military-backed Border Guard Force. After a coup last year, the Myanmar military or Tatmadaw is under international sanctions for human rights abuses. That means the rare earths money it gets from the militia may be fueling a violent crackdown against civilians. The Myanmar military and militia leaders did not respond to requests for comment.

For Dong, a Chinese miner, the hundreds of dollars he hands to the armed men lining the roads in Myanmar are the price of doing business. He is under no illusions about the damage from acids so strong that they corrode the shovels of his bulldozers and excavators.

“This stuff is unbelievable,” he said. “It’s definitely polluting.”

In the meantime, villagers protest in one area in northern Myanmar where the black cardamom and walnuts still grow--for now.

“They are mining rare earth everywhere and we are no longer safe to drink water,” a villager said. “There is nothing to support the children. Nothing to eat.”