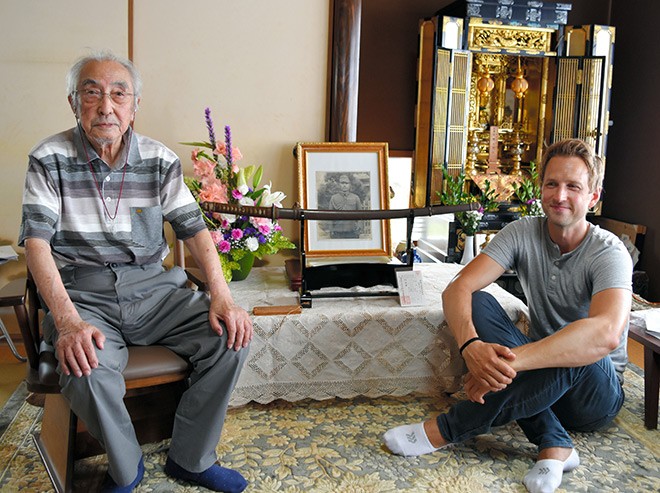 Takemitsu Umeki, left, and Kevin Clost pose with the Shigaseki sword and a portrait of Tomesuke Umeki in Nichinan, Miyazaki Prefecture, on July 2. (Masahiko Ishikawa)

NICHINAN, Miyazaki Prefecture—At the age of 99, Joseph Cursor, a former U.S. soldier who lives in Chicago, was running out of time to fulfill a long-held promise.

But thanks to the strenuous efforts of his grandson, the promise was kept, and a Japanese sword in the U.S. veteran’s possession was returned to the family of a former enemy combatant after a separation of nearly 80 years.

The precious sword was originally crafted in the 16th century and had been passed down through the generations of the Umeki family in the town of Takaharu, Miyazaki Prefecture.

Tomesuke Umeki, an officer in the Imperial Japanese Army, carried the sword with him when he left Takaharu around 1941 for a Japanese-controlled territory during the Pacific War. He traveled from China to the Korean Peninsula.

Umeki was on Jeju Island off the southern coast of the Korean Peninsula when Japan surrendered on Aug. 15, 1945. The U.S. military confiscated his sword.

Cursor found the sword among seized Japanese military weapons stacked up at a beach on Okinawa Prefecture’s main island. It remains unknown how the blade was moved to Okinawa.

A message written in English appeared on a wooden tag strapped to the sword.

It read: “I am very glad to have the honour to ask your favour to send my sword to my home. This sword, as I am told, has been handed down from generation to generation to keep my family safe and comfortable.”

When Cursor read the message, he thought the sword might be of historic value and decided to take it with him to the United States.

But he also promised to honor the wishes of the message writer someday.

After the years went by, Cursor told his grandson, Kevin Clost, 38, that he wanted to return the sword to Japan before he turned 100 years old.

Clost, a journalist living in Denver, Colorado, had limited time to fulfill his grandfather’s wishes.

He sought help from an acquaintance, who happened to be an Asahi Shimbun reporter in Japan, in 2021.

The reporter learned through the Takaharu town office that Umeki’s son, Takemitsu, 97, lives in Nichinan.

Tomesuke Umeki had talked about his missing sword until he died in 1974 at age 74.

Clost found out where he could return the sword to in Japan, but difficulties remained.

After completing all the necessary paperwork and procedures in both countries, Clost landed in Japan in June this year.

He took the blade to the Japanese Sword Museum and other facilities for analysis.

Experts said the weapon is believed to be one of a series of swords referred to as “Shigaseki.” It was likely forged by an artisan called “Kanenobu” or another named “Nobutsugu,” both members of a group of swordsmiths working in the Chubu region in the 1500s during the Muromachi Period (1336-1573).

Clost also obtained a certificate required to own and transfer the sword as an art piece.

On July 2, he visited Nichinan and handed the Shigaseki sword to Takemitsu at his home.

Cursor joined the meeting online from Chicago. He told Takemitsu that he never thought he would see the day when he could fulfill his promise to return the sword.

He said his “postwar years” were finally over.

“This sword has united two families in Japan and the United States,” Takemitsu said, holding the Shigaseki in his hands.

Clost added: “I want the Shigaseki to be kept in peace in its homeland. The Japanese sword being here is proof of peace.”