VOX POPULI: Politicians have no qualms about satisfying their thirst for power 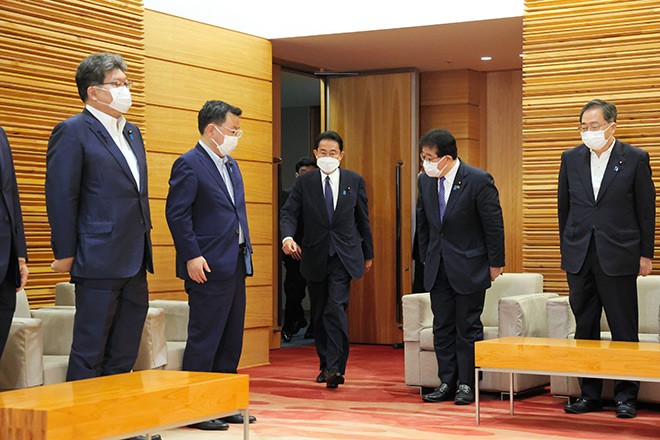 On the day Prime Minister Noboru Takeshita’s Cabinet was reshuffled in December 1988, the newly minted ministers who met the media were adamant in denying their involvement in a scandal.

They denied having ties to Recruit Holdings, which was being investigated for a major insider trading and shares-for-favors scandal.

“Not even a strand of my hair has anything to do with Recruit,” said one minister, protesting his innocence.

Takashi Hasegawa (1912-1992), who had just been appointed the justice minister, was particularly confident as he declared, “I can face you like this because I have no relationship whatsoever with Recruit.”

The following day, however, it came to light he had received a large donation from the company. Hasegawa was forced to resign after only four days in office.

Takeshita’s plan to overhaul his Cabinet for a fresh start backfired spectacularly.

And the one question he and his ministers will not be able to dodge at the news conference is, “What is your relationship with the former Unification Church?”

Any ministers who are found to have attained their political success with the church’s support would not only lose their Cabinet post, their propriety as a legislator would come into question.

A plethora of damage claims have been leveled against this organization. Victims have complained of being talked into buying exorbitantly priced urns, being forced into marrying total strangers, and so on.

But even so, collusive ties between politicians and the organization have continued to surface, such as politicos asking the church for help at election times and attending church functions in return.

Ambition and greed lead people astray in any age.

In the early Kamakura Period (1185-1333), author and poet Kamo no Chomei (1155-1216) described in his collection of tales called “Hosshinshu” an elderly Buddhist priest who was obsessed with attaining the highest rank at a prestigious temple.

Consumed by his greed for power, the priest fell into a perverted state of mind in which he wouldn’t even mind being boiled alive in a cauldron in hell as long as he could achieve his goal.

“How pathetic is his greed,” Chomei lamented.

There are politicians who would feel no shame in seeking the support of even an anti-social religious organization, if only they could fulfill their ambition to get elected to the Diet, be re-elected over and over, and eventually land a Cabinet post.

Today’s Cabinet reshuffle makes me think about the comings and goings of such politicos.