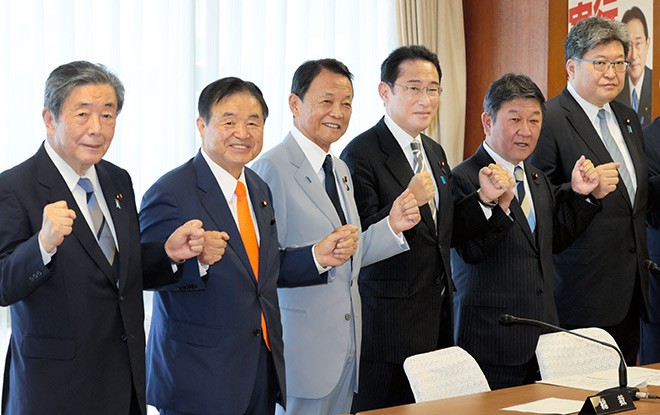 Prime Minister Fumio Kishida’s reshuffled Cabinet has slashed the number of members with ties to the Unification Church from eight to three.

Kishida had repeatedly asked members of the ruling Liberal Democratic Party to review their relations with the Unification Church, formally known as the Family Federation for World Peace and Unification.

Before the Aug. 10 reshuffle, eight Cabinet members had some connection to the Unification Church or its affiliated organizations.

Now, according to political fund reports checked by Asahi Shimbun reporters as well as interviews with political staff, three members in the reshuffled administration have connections to the Unification Church.

They will likely be asked to explain these ties in light of the huge public interest in the Unification Church generated after former Prime Minister Shinzo Abe was shot and killed while giving a campaign speech on July 8.

The suspect, Tetsuya Yamagami, has told police he held a grudge against the Unification Church because of the difficulties caused to his life after his mother made huge donations to the group.

Yamagami also told police he targeted Abe because he believed he had ties to the Unification Church.

Katsunobu Kato, who is returning as health minister, heads an LDP branch in Okayama Prefecture that paid a total of 30,000 yen ($220) to an organization linked with the Unification Church in 2014 and 2016.

Minoru Terada, the newly appointed internal affairs minister, made a similar payment of 20,000 yen in 2018. Terada’s aides said they never realized the donation was to an organization with ties to the Unification Church and that care would be given to prevent a relationship from developing.

Daishiro Yamagiwa, who is being retained as state minister for economic revitalization, made a similar payment in 2013.

Two women were named to the Cabinet, a decrease from three in Kishida’s first administration.

Kishida had named two ministers to his first Cabinet who were under 50 to present a fresh image to the public.

Only one member of the reshuffled Cabinet is under 50. Masanobu Ogura, 41, was named minister in charge of dealing with the declining birthrate.

“I have started a new coalition Cabinet made up of individuals with the needed experience and knowledge to deal with one of the most difficult periods our nation has faced in decades,” Kishida said at a news conference later on Aug. 10.

Hagiuda had initially indicated that he wanted to remain in his post as economy minister. But he may have concluded that serving as LDP policy chief could help his own chances of becoming prime minister one day. Kishida himself served as policy chief under Abe.

Because Hagiuda was a close associate of Abe, Kishida administration officials hope he will serve as a liaison to the more conservative elements within the LDP.

Removing Hagiuda from the Cabinet post will also keep him out of the limelight because he has acknowledged taking part in an event sponsored by the Unification Church.

Outgoing Defense Minister Nobuo Kishi was named as a special adviser to Kishida in charge of national security.

* Minister in Charge of Measures to Deal with the Declining Birthrate:

* Minister in Charge of Economic Security: