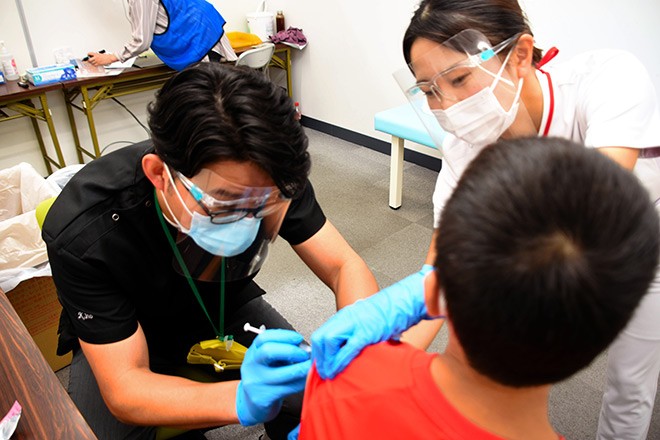 Children aged 5 through 17 should be vaccinated against COVID-19 regardless of whether they have underlying conditions, the Japan Pediatric Society said Aug. 10.

“Even those between 5 and 11 could die (from COVID-19),” Akihiko Saito, a professor at Niigata University who is also an executive board member at the JPS, said at an online news conference. “Vaccinations can prevent that.”

The JPS recommends inoculations not only for those aged 5 through 11 with pre-existing conditions but also healthy children between 5 and 17.

The organization cited new data showing that COVID-19 vaccines are effective in preventing infected children from developing symptoms or becoming seriously ill. The JPS also pointed out an increase in hospitalized children amid the seventh wave of infections.

More children under 20 are contracting the novel coronavirus, accounting for roughly 30 percent of new COVID-19 cases reported in July.

But only 18.5 percent of children between 5 and 11 had received their second COVID-19 vaccine shots as of Aug. 8.

More than 95 percent of children develop only mild symptoms after contracting the virus. But the latest spread of the virus has resulted in an increase in pediatric COVID-19 patients being hospitalized for acute encephalopathy or convulsions.

Fourteen patients under 20 have died in the seven months since the Omicron subvariant began raging across Japan, according to the JPS.

Data presented to an Aug. 8 meeting of the health ministry’s advisory panel on the pandemic showed that recipients of existing COVID-19 vaccines will become 30 percent less likely to develop symptoms of the Omicron subvariant five to eight weeks after their inoculations.

They are also 80 percent less likely to become seriously ill from the subvariant five to eight weeks after their vaccinations, according to the data.

After examining data on the safety of the vaccines in children, the ministry decided to issue a recommendation in early September at the earliest that parents should make utmost efforts to vaccinate their children aged 5 through 11 under the Immunization Law.

But the ministry will not make such inoculations compulsory.

The JPS is also advising children between 12 and 17 to receive their booster shots as soon as possible if five months have passed since their second jabs.