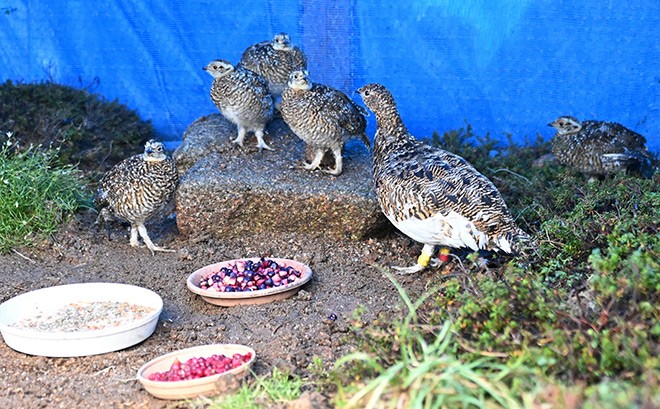 Rock ptarmigans and their chicks are kept inside a protective cage in the Central Japan Alps in Nagano Prefecture on Aug. 10. (Sayuri Ide)

Once believed extinct in the Central Japan Alps, rock ptarmigans hatched at a zoo were transported to a mountain in Nagano Prefecture for eventual release into the wild.

It will be the first attempt to release chicks born in captivity to the natural setting of the Central Japan Alps.

Environment Ministry officials on Aug. 10 airlifted six adult rock ptarmigans and their 16 chicks by helicopter to near the summit of Mount Kiso-Komagatake.

Around 2:40 p.m. that day, the birds emerged from a box they were carried in.

They will be released into the wild after spending about a week inside a protective cage on the mountain to acclimate themselves.

The chicks were hatched at Nasu Animal Kingdom in Nasu, Tochigi Prefecture.

The rock ptarmigan, designated as a special natural treasure, was believed to have gone extinct in the Central Japan Alps over half a century ago.

But one female rock ptarmigan was spotted there in 2018, prompting the ministry to start the project to revive the species’ population.

Eleven of them were moved to Nasu Animal Kingdom and Nagano Chausuyama Zoo in Nagano last summer for breeding.