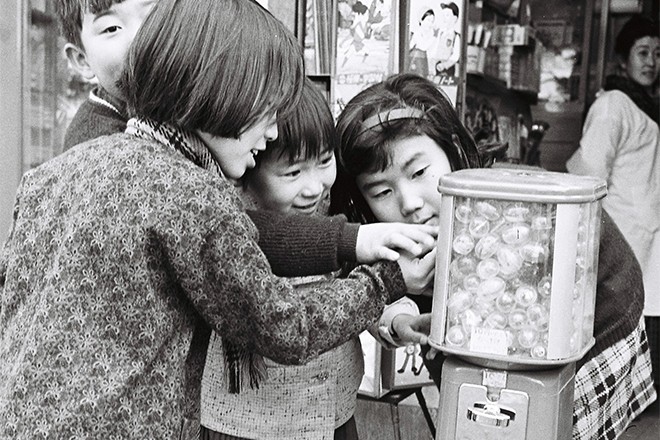 Children wait for what’s in store in a capsule from a “gacha gacha” machine in Tokyo in 1966. (Asahi Shimbun file photo)

You feed coins into a “gacha gacha” vending machine, crank the handle and voila, you get a capsule toy.

I was astounded by how sophisticated the toys had become when I visited a specialty store in Kawasaki with my family the other day.

The toy reptiles and marine critters my child chose were incredibly lifelike.

The market reached a record 45 billion yen in the year through March, representing a 70-percent increase from around two decades ago, according to the Tokyo-based Japan Toy Association.

Undaunted by the novel coronavirus pandemic and fewer children being born, manufacturers have harnessed the demands of adult consumers.

The industry is also churning out a constant stream of items only locally available.

My research took me to the Aomori Prefecture town of Sotogahama on the Tsugaru Peninsula.

The merchandise being sold as “Jimotomin Gacha” (literally, locals’ gacha) are all familiar and readily recognizable to the locals, such as miniature store signboards.

When I fed 500 yen into a vending machine at the Hatada liquor store, I got a key chain in the shape of a ship.

It came with warm words of encouragement for the Mutsu-wan Ferry, a local ferry operator financially struggling due to the pandemic.

“I hope people enjoy my gacha machine and that it’ll help my town and my store to survive,” said Fuminori Jin, 46, the liquor store owner.

A native of this northern town now living in Tokyo happily rolled the machine during a homecoming visit while I was interviewing Jin.

The word “gacha” has come to be used only in the negative sense.

When children lament “oya-gacha” (literally, parent gacha), they mean that their future is predetermined by how rich or poor their parents are because they don’t get to choose their parents.

Similarly, “kuni-gacha” (nation gacha) is used to deplore the fact that the fate of young people is determined by the nation’s politics.

Since when has “gacha” become synonymous with a sense of resignation and helplessness?

Originally, capsule toy machines were designed to make customers giddy with anticipation, wondering what their prize will be.

I fantasized about enterprising young people all over the country creating capsules filled with exciting dreams.

The best of their creations would compete at an ebullient “gacha Koshien”--just as in the National High School Baseball Championship being held at Koshien Stadium--and enliven the local communities.