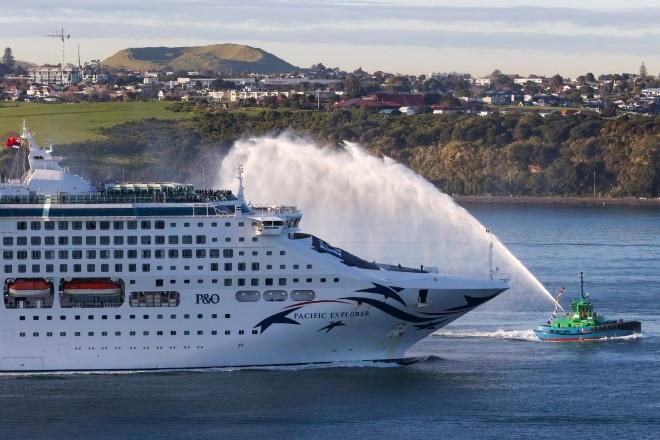 The Pacific Explorer sails into the Waitemata Harbor, in Auckland, New Zealand, on Aug. 12. (New Zealand Herald via AP)

WELLINGTON--New Zealand on Friday welcomed the first cruise ship to return since the coronavirus pandemic began, signaling a long-sought return to normalcy for the nation’s tourism industry.

New Zealand closed its borders in early 2020 as it sought at first to eliminate COVID-19 entirely and then later to control its spread. Although the country reopened its borders to most tourists arriving by plane in May, it wasn’t until two weeks ago that it lifted all remaining restrictions, including those on maritime arrivals.

Many in the cruise industry question why it took so long.

The end of restrictions allowed Carnival Australia’s Pacific Explorer cruise ship to dock in Auckland with about 2,000 passengers and crew Friday morning as part of a 12-day return trip to Fiji that left from Sydney.

“Amazing, isn’t it?” Tourism Minister Stuart Nash said in an interview with The Associated Press. “It’s another step in the reopening of our borders and a step closer to resuming business as usual.”

Nash said it would take some time for international tourist numbers and revenue to return to their pre-pandemic levels, when the industry accounted for about 20 percent of New Zealand’s foreign income and more than 5 percent of GDP.

“I think there’s been many people in the tourism sector who have done it hard over the last two years,” Nash said. “But we’ve always taken an approach where we need to ensure that we get the health response right. Because if we don’t, we know the consequences are dire.”

Not everybody is happy with the return of tourists. A sailboat carrying protesters upset about the industry’s impact on the environment followed the Pacific Explorer into the harbor Friday, before passengers were greeted with an Indigenous Māori welcome and a visit by Prime Minister Jacinda Ardern.

Nash said the pause in tourism had given the nation a chance to reset its priorities. One of those was to go after what he described as wealthier “high quality” tourists who would stay longer and have a story to tell when they returned home.

“We are not targeting the guys that come over and put up on Facebook, ‘Hey, travel around New Zealand on $10 a day living on 2-minute noodles,’” Nash said.

He said another goal was to move away from the perception that people working in the industry would be subject to long hours and low wages, and to make it a more rewarding and aspirational career.

Nash said that with airline tickets more expensive and travelers more risk-averse than before the pandemic, tourism numbers could remain subdued for a while, but he thought the industry would eventually make a strong comeback.

“I see markets like the United States being a really important market for New Zealand,” he said. “There’s been $2 trillion saved in the States over and above that which would have been saved if it hadn’t been for COVID. So, there’s a little bit of money floating around.”