For younger Japanese, issues of war and peace more complex 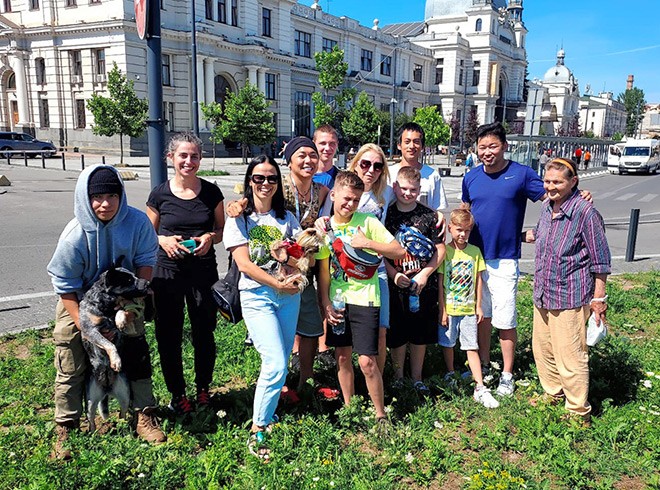 For Japan’s postwar generations that had taken peace for granted, the conflict now raging in Ukraine has given many a new perspective on what it costs not to become embroiled in war, and the sacrifice it takes to fight back.

Kentoku Kojima perhaps is a classic example of that changing mindset as younger Japanese start looking at world events through a lens vastly different from that of their parents and grandparents.

Kojima, 27, grew up believing that war is no solution to the world’s ills. He majored in Russian in university, and saw a bright future ahead of him. For him, Russia’s invasion of Ukraine was the equivalent of being hit with a stun gun.

When he came across an online report about a Ukrainian mother whose son was killed, Kojima broke down weeping because he was the same age as the youth. He was also shocked to the core by videos on social media of war dead.

Kojima felt a desperate need to do something, and even though the government had issued an advisory calling on Japanese nationals not to travel to Ukraine, he quit his job and went there.

Kojima has been working as a volunteer in Kharkiv since May, delivering food to local residents who daily take shelter from artillery fire and aerial bombing deep underground in subway stations. Bombardment of the city is now a constant companion, and Kojima said only luck has kept him alive thus far.

Going to Ukraine proved to be an epiphany for Kojima as it forced him to radically alter his way of thinking about war and made him realize why people fight back. He came to accept that he had never really given much thought to the difference between invasion and a fight for survival.

Many other Japanese have also taken steps after witnessing the military resistance put up by the Ukrainian people in the face of carnage.

Bunji Sunakawa, who won the prestigious Akutagawa Prize in literature in 2021, is one such person. The 32-year-old is also a former member of the Self-Defense Forces.

When the Ukrainian Embassy in Japan posted a message on social media in February seeking volunteer soldiers, Sunakawa quickly fired off an email inquiring about what he had to do to join.

But the embassy deleted the post within days, in part because the Foreign Ministry asked that it suspend the recruitment drive.

Sunakawa never received a response from the embassy, but around 70 Japanese are believed to have sent similar emails.

In the meantime, Kojima’s feelings about putting up resistance are again wavering because a friend he made in Kyiv in May told him he was afraid of being drafted and sent to the warfront to die.

Ukrainian men aged between 18 and 60 are banned from leaving the country and required to fight if asked, but Kojima is determined to find a way to help his friend leave.

The generation that came after the likes of Kojima and Sunakawa is also finding itself forced to confront the issue of war and peace, the price it entails and the legacy it leaves.

At a senior high school in Kanagawa Prefecture, just southwest of Tokyo, 122 third-year students were handed a questionnaire in July that asked, among many other things, whether they thought Japan’s defense spending should be increased.

Fifty-nine percent of them said they were in favor of increased defense spending.

One female student explained that she had always felt war should be avoided at all costs, even if it meant giving in to demands of the “enemy.”

But after watching footage of events in Ukraine, she said, “I cannot say ‘no’ to people who are fighting to protect their nation.”

That inevitably led her to answer that she favored increased defense spending, which the government is hoping to raise to around 2 percent of gross domestic product.

But a classmate felt differently because he was taught in class that the period of trying to change the status quo through military force belonged to a bygone era.

Still, the youth accepts that many of his classmates favored increased defense spending since Russia is showing no signs of letting up in its war that has raged since Feb. 24.

The male student also said he felt he was living in a time that made it difficult to stand out from his peers and oppose increased defense spending.

Shinichi Yano, a Japanese history teacher at the senior high school who has also been deeply involved in peace education, said he had noticed a sea change among his students over how they view the issue.

“I often hear students voice their concerns as they overlap Japan with Ukraine under attack,” Yano said.

Soon after the Russian invasion, 84-year-old Haruki Wada, professor emeritus at the University of Tokyo joined with 12 other Russian history scholars to issue a statement calling on both Russia and Ukraine to immediately stop fighting.

The reaction to their plea was not entirely what they had expected. Subsequent tweets generally were not in support of the statement.

“This completely ignores the will of the Ukrainian government and people (to fight to the end),” said one tweet.

Another said, “You should be asking Russia to withdraw completely.”

Wada’s antiwar stance stems from his childhood recollections of hiding for safety in bomb-proof shelters. During the Vietnam War, he handed out fliers opposing the fighting.

“Although we are sending the same message as in the past calling for an end to war, it is not getting through now,” Wada said. “I feel a wide gap with the rest of society.”

Akihiro Yamamoto, an associate professor of historical sociology at Kobe City University of Foreign Studies, has made a lifelong study of pacifism in postwar Japan.

He noted that past antiwar movements in Japan were driven by two major points in connection to wars spearheaded by the United States. Those in the movements did not want Japan to help its ally in the fighting nor become involved in the combat. That led to major antiwar movements during the wars in Vietnam, the Persian Gulf, Afghanistan and Iraq.

This time around, the United States is not directly involved in the fighting in Ukraine.

“It is difficult for a massive antiwar movement to rise up in Japan because most people do not feel the nation will become involved in the fighting in Ukraine,” Yamamoto said.

He also noted that past antiwar movements derived in the main from the personal experiences of Japan’s war-era generation and their belief that war, in this country or elsewhere, should never be waged again. But such attitudes are difficult to pass on to future generations as those who experienced the horrors of conflict are fast dwindling in number.