Record number of schools update their uniforms to be more inclusive 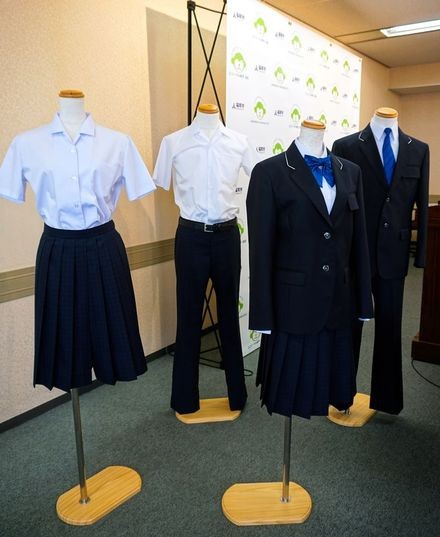 Fukuoka city's newly adopted uniforms from fiscal 2020, which are comprised of culottes and pants to cater to municipal junior high schools, are shown in 2019 in Fukuoka. (Asahi Shimbun file photo)

According to Japan Wool Textile Co.'s findings, 299 junior high schools and 133 senior high schools replaced clothing for students, with their total exceeding the 414 reported in fiscal 1992.

Also known as Nikke, the leading uniform fabric supplier in Tokyo has been keeping statistics on the topic since the 1980s.

Kaneda noted a growing number of schools are adopting blazers with more gender-neutral designs out of consideration for sexual minorities, though uniforms with stand-up collars and sailor-like clothing are still typically prepared for boys and girls, respectively, at public junior high schools.

In 2020, 65 public junior high schools in Fukuoka marked a turning point in having new gender-neutral uniforms for the sake of sexual minorities.

As a result, the number of junior and senior high schools with updated uniforms rose year on year from 155 to 272 in 2020.

Many junior high schools are expected to select new uniforms in the next fiscal year as well, with the possibility that the latest record will soon be broken, Kaneda said.

“Schools’ reasons for changing uniforms have been shifting as time passes,” said Yusuke Oho, 43, editor-in-chief of the specialized magazine Uniform Plus.

For example, when stand-up collars and sailor-like clothing started to be replaced by blazers, educational facilities hoped to bring an end to the popular style of the 1980s of awkwardly modifying school garments by donning shortened jackets or deformed pants.

During the asset-inflated economic boom from the late 1980s to the early 1990s, a succession of private high schools incorporated unique uniforms to stand out from rivals.

One operator asked a fashion designer to work on its uniform. School clothes elsewhere were vividly adorned with flashy checkered patterns and hues such as dark red and light blue.

In the 2000s and after, high schools that were created due to mergers in response to the fallen birthrate opted to have students wear new uniforms in many cases.

Students preferred sagging pants, shorter skirts and other loosely donned uniforms at the time, according to Oho’s accounts.

For that reason, many operators allegedly picked out chic, conservative designs as a countermeasure against what they saw as problematic practices.

Working with Komaba Gakuen High School in the capital, Nikke earlier this year started testing a uniform recycle project. Used garments are processed into materials for textiles for new uniforms at a factory.

“Uniforms are eco-friendly items from the start because they are continuously used over the three-year school period,” said Kaneda. “I want to help people understand their true value again, now that new uniforms are increasingly being introduced.”