Asakusa-based gang decides to call it quits after a century 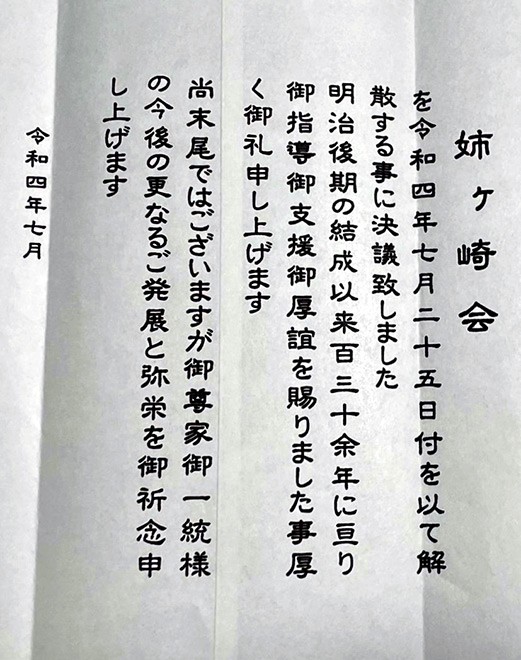 A notice issued by the Anegasaki-kai crime syndicate says it decided to disband on July 25. (Provided by a source)

An organized crime syndicate in Tokyo with roots dating to around a century ago has finally decided to call it quits, a victim of changing times and social mores, police crackdowns and a membership that is ... well past its prime.

The Anegasaki-kai, based in the old downtown Asakusa district of the capital, survived primarily by scalping tickets for concerts and running stalls at summer festivals, according to investigative sources.

It notified other yakuza groups in the capital that it decided to disband on July 25, the sources said.

Tokyo’s Metropolitan Police Department said it learned that the notice was sent to the Kyokuto-kai, a designated crime syndicate, and other gangs, and is now trying to verify it.

“We need to make sure if it actually disbanded,” said an officer in charge of the department’s anti-gang measures. “We will closely monitor developments.”

Although the Anegasaki-kai is not designated as a crime syndicate targeted for tougher control under the anti-organized crime law, law enforcement authorities treated it as such on grounds it could get its members to commit violent crimes on a regular basis at a moment’s notice.

Just like other crime syndicates, the Anegasaki-kai’s membership began to shrink as a result of police crackdowns and an aging membership.

Since its activities mainly revolved around events attended by the public, the group’s finances were hit particularly hard by the COVID-19 pandemic, the sources said.

The Anegasaki-kai was regarded as a leading ticket scalper in Tokyo as it monopolized the business in the capital. The group also made a handsome profit running stalls at summer festivals, the sources added.

For well over a decade, the group would “hire” part-timers to buy up tickets in bulk for concerts featuring prominent live acts or sports events, such as professional baseball games, a source close to another crime syndicate said. This activity was its main source of funds.

The Anegasaki-kai prospered by reselling those tickets at inflated prices to diehard fans near the event venues.

In more ways than one, it is also a victim of the age. The group had struggled to make money from scalping and running stalls as many festivals, concerts and other events were canceled nationwide after the pandemic began raging across Japan in 2020.

Another factor is that tickets, including electronic ones, increasingly are being sold online these days, and cannot be resold so easily.

“The group’s businesses are probably no longer lucrative,” said an investigative source.

(This article was written by Keita Yamaguchi and Masayuki Takashima.)