1985 JAL disaster mourned: ‘I will leave my tears on the mountain’ 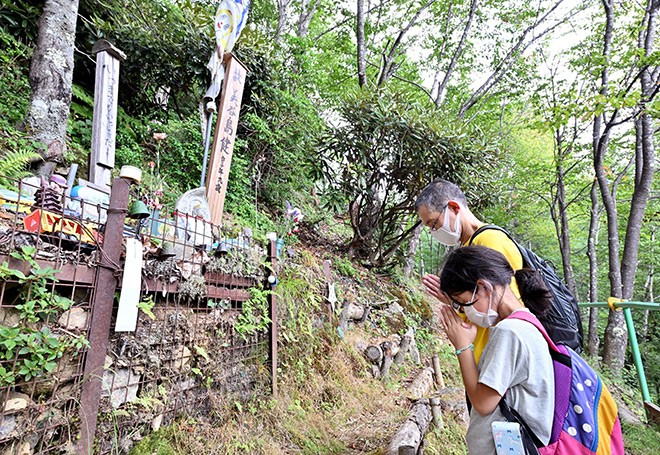 Shin Miyajima and his 9-year-old daughter on Aug. 12 visit the grave marker on Mount Osutakayama of his younger brother, who was 9 years old when he died in the JAL disaster in 1985. (Hiroyuki Yamamoto)

UENO, Gunma Prefecture--Bereaved family members on Aug. 12 trudged up to the ridge of Mount Osutakayama here where remnants of the world’s deadliest single-aircraft disaster are still being found.

The climbers, many of whom carried flowers, offered prayers at grave markers and the cenotaph on the slope dedicated to the 520 passengers and crew members who were killed when a Japan Airlines jumbo jet crashed into the mountain 37 years ago.

“I still want to see my brother. We all feel the same even 37 years after the accident,” she said. “My brother used to tell me to always keep smiling, so I will leave my tears on the mountain and go on with my life smiling.”

Shin Miyajima, 50, offered prayers at the site with his daughter, Mei, 9.

Miyajima’s brother Ken was 9 years old when he died aboard Flight 123.

“Our sorrow will never go away. But we keep climbing every year to try to accept the reality,” Shin said. “Mei has reached 9 years old, and this is a turning point. I prayed for my brother, telling him that I will keep passing on his story to the next generation.”

Norihisa Kawase, 60, said his older sister, Hiromi, was 24 years old when she took the JAL flight with her friends after visiting Disneyland.

“We used to fight all the time. But I’d like to devote my thoughts to my sister at least for today. I will keep coming as long as my health allows,” he said.

Kawase arrived at the mountain after driving alone from his home in Kaizuka, Osaka Prefecture. He has consistently climbed to the ridge at this time of year, even during the COVID-19 pandemic.

In 2020, the annual memorial ceremony was held after the pandemic reached Japan.

Last year, a COVID-19 state of emergency was issued in many areas of Japan. But many family members, even elderly ones, still climbed to the site to spend precious time thinking about their loved ones.

Before this year’s event, Japan Airlines Co. showed reporters an oxygen mask that was discovered on June 24 in an area called Sugenosawa, where four survivors of the disaster were found.

An investigation confirmed the mask came from the jumbo jet, but it was unclear if it was used by a passenger, JAL said.

A construction worker using a power shovel uncovered the mask during restoration work for mountain roads damaged by a landslide caused by Typhoon No. 19 in October 2019.

In July last year, an engine component was found in Sugenosawa.

Such large items had not been found at the disaster site for at least a decade.

“I was surprised that remains of the accident 37 years ago were found,” said Hiroaki Sakai, head of operations at JAL’s safety promotion department. “The oxygen mask may have been worn by the deceased. It has special meaning for the bereaved families.”

He said he thinks the discovery is “a message to us all to keep up our safety efforts.”

JAL’s safety promotion center in Tokyo exhibits parts of the aircraft and belongings of the deceased found at the site, but there are no oxygen masks on display.

The company said it will consider showing the mask to the public after listening to the opinion of the bereaved families.