Bonds between LDP, Unification Church date back half a century 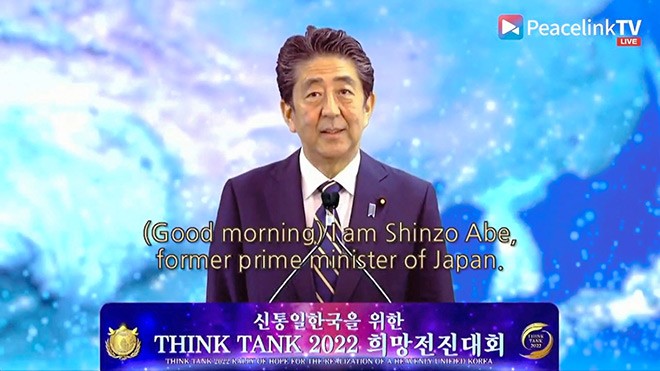 Former Prime Minister Shinzo Abe appears in a video message shown at an event organized by an associated organization of the Unification Church in South Korea in September 2021. (The Asahi Shimbun)

Since the suspect in the slaying of former Prime Minister Shinzo Abe expressed a grudge against the Unification Church, the relationship between the organization and the ruling Liberal Democrat Party is increasingly coming to light.

Interviews with current and former LDP lawmakers and people close to the Unification Church, now formally called the Family Federation for World Peace and Unification, showed that the two have developed an extensive and deep relationship over half a century.

Some of the ruling party’s top leaders have been involved, including Nobusuke Kishi, prime minister between 1957 and 1960; Shintaro Abe, a former foreign minister; and Shinzo Abe, the nation’s longest-serving prime minister.

The Unification Church, which espouses anti-communism, has particularly sympathized with a right-leaning LDP faction known as Seiwa Kai, according to the sources.

The faction was headed by Shintaro Abe during the late 1980s and briefly by Shinzo Abe before he was shot dead in Nara in July while campaigning for a candidate for the Upper House election.

Organizations affiliated with the Unification Church have backed LDP candidates in their election campaigns, while LDP leaders have expressed support at events held by affiliated organizations, according to the sources.

The Unification Church was founded by Sun Myung Moon in Seoul in 1954, the year after the ceasefire that ended hostilities in the Korean War.

It started its propagation efforts in Japan four years later, before gaining status as a religious corporation in the country in July 1964.

Its first chairman in Japan was Osami Kuboki, who had been a secretary for the chair of Rissho Kosei Kai, a Buddhist group.

In November 1964, the organization moved its headquarters to Shibuya Ward in Tokyo.

According to a book titled “The History of the Unification Movement in Japan,” compiled by people connected to the organization, the headquarters was located next to the home of former Prime Minister Nobusuke Kishi and housed in the building used as the Prime Minister's Official Residence while Kishi was in power.

The Unification Church’s beliefs place an importance on traditional family values and sexual purity. The organization also is strongly anti-communism.

In 1968, an associated organization of the church called Kokusai Shokyo Rengo, or the International Federation for Victory over Communism, was founded in South Korea and Japan.

The aim was to promote the “Shokyo" (beating communism) movement.

Its honorary chair in Japan was Ryoichi Sasakawa, chair of the Japan Shipbuilding Industry Foundation, who had been a right-wing politician before World War II.

Kishi, who was close to Sasakawa partly because they both were detained as Class-A war criminals after the war, supported the Shokyo movement.

In the 1970s, Kishi frequently attended events of the church and organizations connected to it.

“The History of the Unification Movement in Japan” describes a speech that Kishi gave when he visited the organization in 1973.

Kuboki later said in his book, “Mr. Kishi’s friendship was major momentum for the Shokyo movement to make significant progress.”

According to a magazine published by Kokusai Shokyo Rengo and other sources, on his visit to Japan in 1974, Sun Myung Moon gave a speech at the “Hope Day Dinner,” which was held with Kishi acting as honorary chair of its organizing committee.

At the dinner, Finance Minister Takeo Fukuda, who would become prime minister two year later, shook hands with Moon. Fukuda gave a greeting speech, saying, “A great leader has emerged in Asia. His name is Sun Myung Moon. Today, I’m in the same place as Mr. Moon, an occasion that I was eagerly looking forward to, and listened to his lofty preaching. It is really a great day today.”

On the historical relationship between the Unification Church and the LDP, an individual connected to the organization has said, “We are an organization that does anti-communism activities. Since the era of former Prime Minister Kishi, we have been particularly on close terms with Seiwa Kai.”

This means that the Unification Church has placed importance on its relationship with Seiwa Kai, the LDP faction that Fukuda founded by taking over a large part of the intraparty clique led by Kishi.

Seiwa Kai was the predecessor of the faction that was led by Shinzo Abe until he was shot dead in July. The faction, still called the Abe faction, is also known as Seiwa Kai.

Kishi died in August 1987 at age 90. Two months later, Shintaro Abe, who was the head of Seiwa Kai, became secretary-general of the LDP.

Multiple former LDP lawmakers who are familiar with the situation around that time have said that Shintaro inherited connections with the Unification Church that had been formed during Kishi's years.

The Asahi Shimbun reported that he “expressed gratitude toward Shokyo Rengo’s material and mental support for election campaigns or party’s activities” at the event.

During the 1980s, Shokyo Rengo expanded its network of local organizations across Japan by calling for support for the enactment of the state secrets protection law, commonly known as the prevention of spying law, which Kishi and other LDP lawmakers were aiming at.

The organization boasted that it succeeded in bringing victory to most of the 150 candidates it backed in the Lower and Upper house elections held on the same day in 1986. Those candidates were mainly from the LDP and the now-defunct Democratic Socialist Party.

According to a former Lower House member who belonged to Seiwa Kai, after becoming the LDP’s secretary-general, Shintaro Abe eagerly encouraged the party’s younger lawmakers to accept support from the Unification Church.

The source quoted Shintaro as saying: “Using (the church) in elections will give you an advantage” and “Why don’t you let (the church) look after you?”

Shintaro was counted as the LDP’s “new leaders,” or potential future prime ministers at the time, along with Noboru Takeshita and Kiichi Miyazawa.

Although he lost to Takeshita in a fight to succeed Yasuhiro Nakasone, who resigned as prime minister in 1987 after a long stint in office, Shintaro was looking for the next chance to become the nation's top leader.

The former Lower House member who belonged to Seiwa Kai said, “Shintaro was trying to expand his faction. The Unification Church successfully made inroads (into the faction) by taking advantage (of his ambitions).”

Around this time, the Unification Church’s so-called “reikan shoho” (psychic marketing) activities emerged as a social problem and was frequently discussed in the Diet.

In the psychic marketing scheme, church members preyed on people’s anxiety to scam them into buying expensive vases or other items.

During an extraordinary Diet session in July 1987, a Japanese Communist Party lawmaker told Prime Minister Yasuhiro Nakasone, “It is obvious that the Unification Church and Shokyo Rengo are behind the psychic marketing.”

Nakasone countered by saying, “(You) said that the LDP should sever its ties with certain organizations, but the comment is a significant infringement on the freedom of belief and actions.”

Even after Shintaro died of disease in 1991, the relationship between the LDP and the Unification Church continued.

The LDP struggled in national elections from the end of the 1980s to the first half of the 1990s as a result of the introduction of the consumption tax, the Recruit influence-peddling scandal and the popularity of the Japan New Party, a new political party.

The aforementioned former Lower House member who belonged to Seiwa Kai said that the Unification Church's side offered to help him in the 1990 and 1993 Lower House elections.

A former Lower House member who belonged to a different LDP faction, who won seats in consecutive elections from 1990, also said the church continued to support his campaigns from around that time.

The Universal Peace Federation (UPF), an associated organization of the Unification Church, showed a video message from former Prime Minister Shinzo Abe at an event in September 2021.

The organization introduced Shinzo as "a member of a political dynasty of Japan," emphasizing that his grandfather was former Prime Minister Nobusuke Kishi and his father was former Foreign Minister Shintaro Abe.

In the video, Shinzo said, “I’m honored to have the opportunity to give a speech (at an event) organized by the UPF to promote dialogue to achieve a better world and efforts to resolve various issues peacefully.”

He also said, “I pay my respects to (the Unification Church and UPF) President Hak Ja Han and everyone else. I highly commend (the UPF's) focus on family values."

Shinzo added, “We should be wary of developments that put wrong values into action by disguising them as social revolutionary movements.”

In May 2006, when he was chief Cabinet secretary in the administration of Junichiro Koizumi, Shinzo also sent a congratulatory telegram to a UPF event.

The congratulatory message was criticized because people were falling victim to the Unification Church’s psychic marketing schemes around that time.

A group of lawyers working for such victims demanded that Shinzo explain the telegram, saying that the Unification Church could cite it as proof that the chief Cabinet secretary was supporting its activities and recommending them.

In the past 20 years or so, the Unification Church placed importance on its relationship with Shinzo, who was at the center of the ruling party.

A person connected to the Unification Church has told The Asahi Shimbun that the church has interacted with Shinzo through senior officials of the Federation of World Peace, another associated organization of the church, who acted as a liaison.

The source said the church's side supported and helped candidates belonging to the Abe faction win seats in the last three Upper House elections, including Yoshiyuki Inoue, who was an aide to Shinzo when he was prime minister and won in the July election.

Since Abe's slaying, a large number of LDP lawmakers have been found to have connections with the Unification Church or its associated organizations.

A group of lawmakers that has a connection with an associated organization held its general meeting in June in the Diet building.

The list of proposed directors of the group, which was voted on at the general meeting, covered nearly 30 LDP lawmakers, including those belonging to Seiwa Kai (the Abe faction) as well as the factions led by LDP Vice President Taro Aso and Prime Minister Fumio Kishida.

However, many LDP lawmakers have said that it was Seiwa Kai and its leader, Shinzo, that had a deep relationship with the Unification Church.

A person connected to the LDP said, “Seiwa Kai, which supports right-wing beliefs, and the Unification Church have historically been a good match.”

Another individual close to the LDP, who is knowledgeable about election affairs, said, “Seiwa Kai, not the LDP, decided how the votes organized by the Unification Church should be distributed.”

Sekai Shiso, a magazine published by Kokusai Shokyo Rengo, put a photo of Shinzo Abe on its cover and carried a feature article titled “Rating successive Cabinets” in its June 2018 issue.

The magazine said the article is “an attempt to rate the Abe administration in the postwar political history.” The article gave an “A” rating, the top score out of the five ranks, to the Cabinets of Shigeru Yoshida, Nobusuke Kishi, Yasuhiro Nakasone and Shinzo Abe.