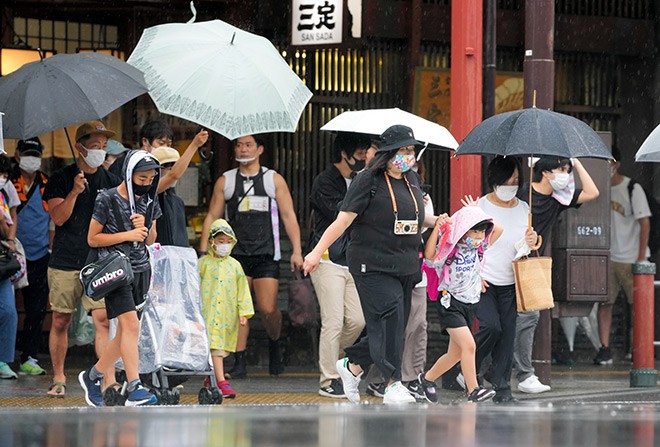 Visitors to the Kaminarimon gate of Sensoji temple in Tokyo’s Asakusa district brave an approaching typhoon on the afternoon of Aug. 13. (Takuya Isayama)

The eighth typhoon of the season made landfall on the Izu Peninsula in Shizuoka Prefecture around 5:30 p.m. on Aug. 13, bringing pounding rain and high winds that disrupted rail and air services, according to the Japan Meteorological Agency.

The JMA warned residents in the Tokai region to be wary of flooding, landslides and strong winds because linear rainbands were also forecast.

JMA officials said that as of 3 p.m. the typhoon had a central pressure of 998 hectopascals, maximum sustained winds of 72 kph near the center and maximum instantaneous gusts of 108 kph.

It was expected to move in a northeasterly direction off the Tokai coast and projected to sweep over the Kanto-Koshin region as well.

Torrential rains were forecast for the Pacific coast side of eastern Japan through Aug. 14.

The typhoon brought heavy rain to the region from the morning of Aug. 13, with Aoi Ward in Shizuoka city recording 34.5 millimeters of rain in one hour and Omaezaki registering 33.5 mm.

Rainfall tends to become even heavier if linear rainbands form.

The typhoon was also expected to whip up waves on the Pacific side of eastern Japan. Waves as high as 6 meters were forecast for the Kanto-Koshin and Tokai regions and Izu islands on Aug. 13 as well as 3 meters for the Tohoku region.

Meteorologists projected maximum instantaneous wind speeds of 108 kph in the Tohoku, Kanto-Koshin and Tokai regions as well as the Izu islands.