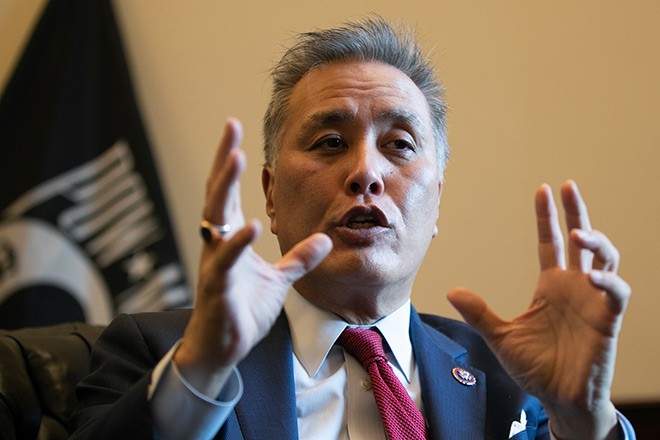 WASHINGTON--A member of a U.S. delegation that recently visited Taiwan said any criticism about the trip that infuriated China should be directed at Beijing and not the members themselves.

China was so incensed by the visit, which was led by House Speaker Nancy Pelosi, it staged intimidating war games exercises around the island territory.

Mark Takano, who accompanied Pelosi on the trip that took the group to Japan as well, said in an Aug. 11 interview with The Asahi Shimbun that the main aim “was to emphasize the continuance of the status quo.”

He accused China “of trying to establish new levels of normalcy.”

Takano, chairman of the House Committee on Veterans' Affairs, led a different group of congressmen to Taiwan last autumn.

Pointing to heightened pressure being applied on Hong Kong by Beijing as well as the Russian invasion of Ukraine, Takano said, “We are concerned on a bipartisan basis in Congress that China has seriously put in jeopardy a free and open Indo-Pacific (region).”

Addressing reports that U.S. President Joe Biden expressed reservations about having a Congressional delegation visit Taiwan, Takano pointed to the system of checks and balances in the United States and said: “The United States Congress is a separate branch of government. We are a coequal branch to the president.”

In the aftermath of the visit to Taiwan by Pelosi and her group, China staged military exercises around Taiwan that involved firing ballistic missiles, five of which landed within Japan’s exclusive economic zone.

That led some critics of the Pelosi trip to argue that it gave Beijing an excuse to ramp up military pressure on Taiwan and served only to worsen the national security environment in the East Asia region.

“This is a very convenient argument for China,” Takano said in addressing the criticism. “But conveniency is not the same thing as truth.”

Takano noted that the last House speaker to visit Taiwan was Newt Gingrich, a Republican, and added, “the status quo of our relations with Taiwan includes congressional visits.”

Elaborating on the fallout from the latest visit, Takano said, “I think all democratic partners in Asia interested in preserving a free and secure Indo-Pacific have a heightened urgency to hold China accountable to a manner of getting one which is rules-based.”

Takano also said there was a greater need for cooperation between Japan, the United States and South Korea to counter aggressive moves being made by China.

“The regional trilateral alliance will have tremendous spillover effects on the security of Taiwan,” he said.

Question: What was the objective of the congressional delegation visit to Taiwan?

Takano: We are concerned on a bipartisan basis in Congress of strengthening our relationships with the Indo-Pacific democracies. We count Taiwan as a very important democracy.

The main aim was to emphasize the continuance of the status quo, being the Taiwan Relations Act by the Congress, the (U.S.-China) Communiques and a free and secure Taiwan Strait. The status quo includes congressional visits to Taiwan.

Q: What do you say to criticism that the visit gave China an excuse to increase military pressure on Taiwan?

It’s China that wants to make (congressional visits) abnormal and to stop them.

Q: Was the visit in line with the policy of the Biden administration regarding the Indo-Pacific region?

A: Yes, the president has enunciated several times his foreign policy of reinvigorating the idea of democracy versus authoritarianism. I think we had a very powerful way of showing leaders in Congress visiting a partner like Taiwan.

Q: How will the United States prevent China from using military force or invading Taiwan?

A: How we encourage China to be committed to a free and secure Indo-Pacific that’s rules-based is for the trilateral alliance of the United States, Japan, and South Korea to become closer and more cooperative. The ties among those three nations economically, politically and militarily will have tremendous spillover effects on the security of Taiwan. We want to call upon the heads of state (of the three nations) to enter into a summit as soon as possible.

Aidan Lilienfeld, a staff reporter at The Asahi Shimbun’s American General Bureau, contributed to this article.