University marks crash of U.S. military ’copter on its campus 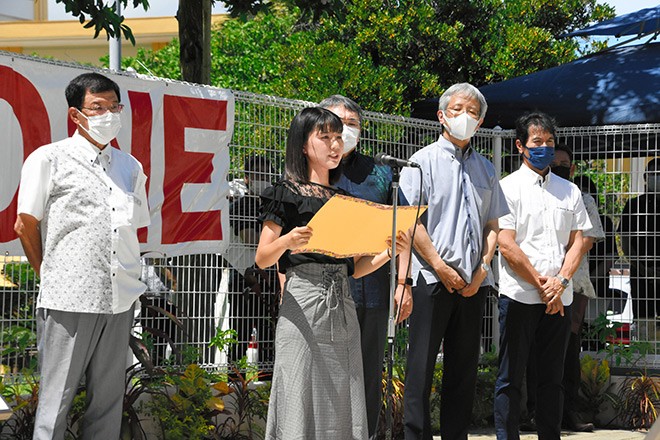 GINOWAN, Okinawa Prefecture--When a U.S. military helicopter crashed and burned at the campus of Okinawa International University here 18 years ago, expectations were high that the incident would bring about a sea change in the way U.S. forces conducted their operations.

Nothing of the sort happened.

Marking the anniversary of the Aug. 13, 2004, crash, university president Eiken Maetsu decried the lack of progress in the situation.

“The deadline for the return of land for the Futenma base passed years ago,” Maetsu said in recalling the accident involving a helicopter attached to the neighboring U.S. Marine Corps Air Station Futenma.

In 1996, Tokyo and Washington tentatively agreed on the return of the land occupied by the base to Japan within five to seven years.

But that has been postponed repeatedly as a replacement facility to take over Futenma’s functions has yet to be built.

Maetsu noted that aircraft deployed to the Futenma airfield have continued to cause problems, citing emergency landings at private-sector airports around Japan. Other incidents involved objects falling from helicopters flying overhead.

“But nothing has changed and the situation surrounding the base is getting worse,” Maetsu said.

No students or university staff were hurt as the school was closed for the summer break. However, the wall of a school building was badly charred by the burning wreckage.

The commemorative event was attended by students, school staff and local residents to push yet again for the closure of the Futenma facility once and for all.

Even the central government has acknowledged that the Futenma base, located in a densely populated residential area, poses an unacceptable security risk. For years, reclamation work off the Henoko district of Nago, also in the prefecture, has been going on to build a replacement facility.

Mio Nagata, a freshman of the university who hails from Saitama Prefecture outside Tokyo, said a fresh opportunity should be created to thrust the U.S. base issue into the nationwide public spotlight.

“With memories of the last war fading fast, I am afraid that people on the main islands may forget accidents caused in postwar years by the U.S. military stationed in Okinawa,” she said.