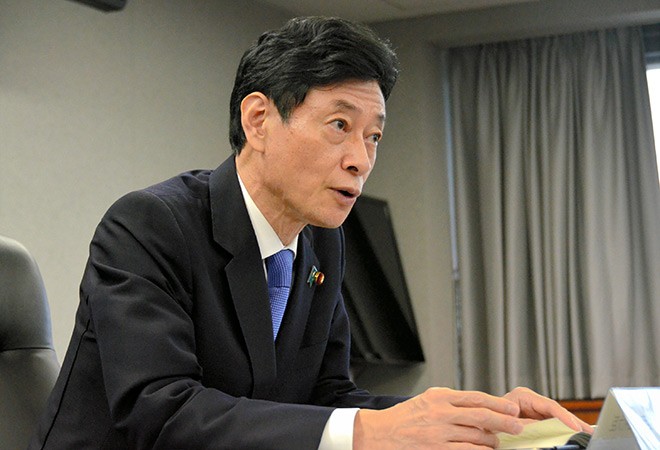 New minister of economy, trade and industry Yasutoshi Nishimura during an interview on Aug. 12 (Shiki Iwasawa)

Newly appointed economy minister Yasutoshi Nishimura pledged to push for restarts of more than 10 nuclear reactors to prepare for a possible power supply shortfall in summer next year and beyond.

To date, only 10 reactors have gone back online with approval from their host communities after they cleared more stringent reactor safety regulations put in place by the Nuclear Regulation Authority in the aftermath of the 2011 Fukushima nuclear disaster.

Nishimura’s vow, given during interviews with media outlets Aug. 12, came after the government announced its policy to “make maximal use” of reactors, citing efforts to lessen the nation’s carbon footprint and anticipated shortage of power supply due to the shutdown of thermal power plants.

The government expects nine of the nuclear reactors to be online in time for this winter, when power supply is projected to be precarious.

To ensure more reactors come into service in the months ahead, Nishimura said the government “should also work assiduously to help (utilities) secure the understanding and cooperation of local governments on the issue of restarts.”

His pledge is at odds with the government’s Basic Energy Plan in which the government stated it will “reduce its reliance on nuclear energy as much as possible.”

However, Nishimura said he will respect the Basic Energy Plan as it represents the government’s “consistent policy.”

He also dampened speculation about the possible construction of new reactors or the replacement of aged reactors with new ones, an idea promoted by some segments of the government and the ruling coalition.

“I am not envisaging them as of now,” he said.