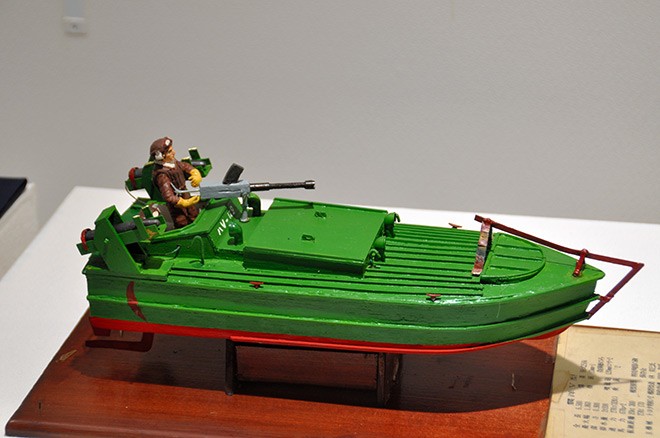 In the final days of the Pacific War 77 years ago, the Imperial Japanese Army was preparing to fight a decisive final battle on Japan’s mainland.

One relic near a bathing beach in Tateyama, Chiba Prefecture, recalls this era-- a slope built to launch "Shinyo" special motorboats for suicide attacks. You can easily overlook the slope, a concrete platform jutting into the sea, which is shallow for some distance, unless someone tells you about it.

Shinyo (ocean shakers) were wooden motorboats armed with explosives and developed as suicide weapons. They were designed to explode, along with the driver, when they struck an enemy ship.

“It is said that shipwrights in nearby communities built these boats,” said Emiko Ikeda of Awa Cultural Heritage Forum, a local nonprofit organization.

Six Shinyo boats were deployed to the site on Aug. 13, 1945. They were immediately loaded with explosives and readied for a mission. In those days, there were bases and facilities for suicide missions in various parts of Japan involving suicide speedboats, suicide torpedoes and suicide aircraft.

Director Kihachi Okamoto’s “Japan’s Longest Day,” a 1967 film about the final hours of World War II, depicts how Japan’s wartime leaders wavered between surrendering or fighting a decisive battle with U.S. forces on the mainland.

In one scene of the film, a member of the staff argued for fighting to the end: “Japan will surely win if 20 million more 'tokko' (suicide) attacks are launched, if we fight with the resolution to allow half of our male population to do tokko missions.”

This sounds like pure madness to me, but things that were not far from this idea were probably being seriously considered.

Drills were conducted around the nation to train for a suicide attack, in which the attacker was supposed to hold a bomb in his arms, dive under a tank and detonate the bomb.

Ordering people to fight enemies with a bamboo spear was no different from pushing them into suicide attacks.

Tokko suicide attacks and missions offering certain death are extraordinary combat tactics, but they may only be grotesque manifestations of the nature of war, which forces people to fight with a willingness to sacrifice their lives.