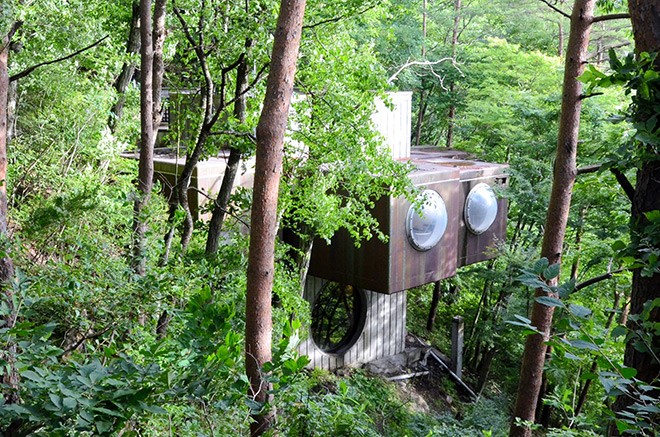 Capsule House K, designed by Kisho Kurokawa, is seen in Miyota, Nagano Prefecture, on July 4. Previously a villa residence, the building is now used as a venue for photo sessions and for private lodging. (Ryo Suganuma)

MIYOTA, Nagano Prefecture--A designer building with protruding round windows juts out of a steep sidehill amid a forest in an area of villa residences here.

It is a “sister” building of Kurokawa’s iconic Nakagin Capsule Tower, a futuristic apartment house in Tokyo’s Ginza district and a representative work of the Metabolism avant-garde architectural movement.

Kurokawa used the building, called Capsule House K, as a villa residence. His son, Mikio, started offering it for private lodging in May.

“I hope visitors will spend a leisurely time here and enjoy being in one of the few existing Metabolism buildings,” said Mikio, 56.

The concept of Metabolism, set forth in 1960 by a group of young architects including Kurokawa, centered on updating cities and buildings organically as times change.

Like the capsule tower in Tokyo, Capsule House K was designed with replaceable capsules, although none of the capsules has ever been replaced at either building.

The reinforced concrete building, with one above-ground and one basement level, has a total floor area of 103.32 square meters.

It was completed in 1973, a year after the Nakagin Capsule Tower, which is currently being dismantled.

It is said the structure featured a view of Mount Asamayama when it was built, but trees have grown taller and the field of vision is now blocked by branches and leaves.

The building was initially used as a model house for a detached dwelling with capsules and was visited by members of the architectural community, both Japanese and from abroad.

The basement level, which served as an atelier, was refurbished into a bedroom in 1997.

Capsule House K fell into disuse after Kurokawa died. The ownership of the building was temporarily transferred to an outside party. The property remained ill-maintained and somewhat neglected for some time.

Mikio bought the structure in 2019 to preserve it. He began renting out the building for photo sessions after he cleaned it and did maintenance work on its water and electrical systems.

As private lodging, a maximum of seven individuals can stay per night, and they can use the kitchen to cook.

Part of the pieces of furniture are original fittings from the capsules, while the rest belongs to Kurokawa’s personal effects. A sketch of the house by the architect is also on display.

Reservations can be made on the Japanese-language website of Mikio’s company: (https://miraikurokawa.jp/).

The Nakagin Capsule Tower is expected to disappear as early as the end of this year.

The structure had 11 stories, with part of the edifice being 13 stories high, and featured 140 capsular dwelling units, each with a floor area of 10 or so square meters.

Capsule House K will ensure that the spirit of the Metabolism architectural movement will live on in the woods of Nagano Prefecture.