EDITORIAL: 77 years after war’s end, fears return of a world where force ruled 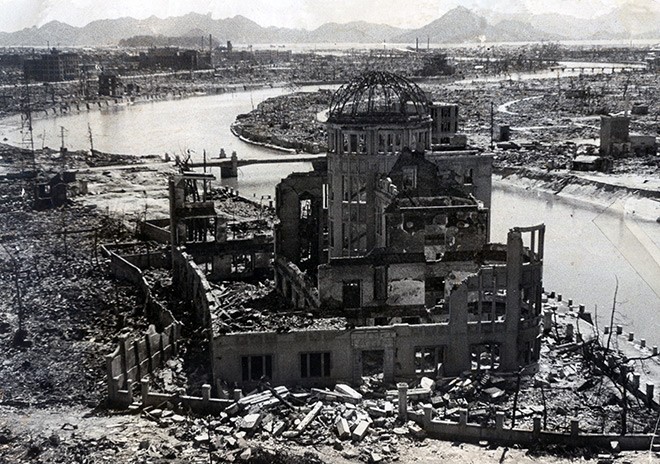 A war of aggression continues in Europe, whereas a rivalry of forces across the Taiwan Strait is only deepening.

The world is thus shrouded in dark clouds as Japan commemorates the anniversary of its defeat in World War II in 1945.

Even after 77 years, vivid afterimages of painful memories are everywhere: fear in the minds of people who ran about trying to flee to safety during an air raid, their despair in the face of houses and communities all burnt down, and their sorrow over the loss of family members, to name but a few.

Many survivors of the war have said they see a reflection of their own experiences from that time in the current news reports on the tragic situation in Ukraine. It is probably all too natural for us to harbor a feeling of hatred for war and give our thoughts to those who are suffering under it.

There is, in the meantime, one historical fact that we should not forget.

Japan once dreamed of expanding its own sphere of influence, invaded neighboring nations, ended up isolated and brought ruin upon itself. That past conduct of Japan largely overlaps, if anything, with what Russia is doing today.

As citizens of a nation that rose again from that mistake, we have one principle to emphasize before a world audience: measures that make light of the lives and livelihoods of people in the name of a nation are always wrong, under all circumstances.

Now is the time for Japan to make a case for the antiwar philosophy that the country has cultivated under its pacifist Constitution.

With the post-World War II international order being compromised now, we should earnestly seek pathways to block regression to a world where force ruled.

What Russia and China are doing appears to be attempts at using force to recover their “control” over areas that they lost in the past. The reckless way Russia ignored international law is particularly unforgivable.

Be that as it may, it is also too dodgy to counter those moves by rushing to cast the situation in the light of a friend-or-foe “battle between democracy and autocracy.” Doing so could not only draw a line across the world and divide it into two parts but also turn people’s eyes away from circumstances taking place in individual democracies.

At least formally, Russia is also a democracy, with its universal elections and a separation of the administrative, legislative and judiciary branches of government. The nation still opened the war on Ukraine under an increasingly dictatorial president.

While Washington is denouncing the war, it still remains fresh in many minds that the United States also waged a mistaken war on Iraq, thereby causing an enormous loss of human lives.

No country is free from the danger that the administration in power and public opinion may lean to one direction and veer out of control. It is therefore essential to have a sound democracy where free and diverse arguments are guaranteed so people will not lose sight of the possible consequences of a war.

The dodgy relationship between a democratic system of government and war is already evident in “History of the Peloponnesian War,” a work of Thucydides, an ancient Greek historian.

The democratic government system of Athens, which has so often been given high marks, was also combined with a dog-eat-dog survival of the fittest, expansionism, and the idea of dying for the sake of ideals.

Athenians set about a military expedition after their ecclesia was dominated by advocates of war. The city-state, as a consequence, was defeated and fell into decline.

American John Rawls, on reading the ancient Greek chronicle of the war, called it a “story of the fated self-destruction.”

Rawls, who died 20 years ago, was one of the leading political philosophers of the 20th century. And he was a U.S. serviceman in the Philippines 77 years ago on Aug. 15, 1945.

According to moral philosopher Takashi Kawamoto, Rawls felt distressed after he learned at the front about the U.S. atomic bombing of Japan, skeptical whether the attack was really justifiable.

Rawls later came to Japan as a member of the Allied occupation and had an opportunity to see Hiroshima’s scorched earth out of a train window, Kawamoto says.

In “The Law of Peoples,” a book Rawls authored in his later years, he presented a blueprint for an international community that conforms with justice, which he said is realizable. And he said that “peoples,” rather than states, will be the agents of a similar community.

The political philosopher was convinced that different social groups can reach an “overlapping consensus,” across national borders, if only some good sense and order are there.

Different countries and regions of the world continue to have disparate worldviews and cultures even in this age of the 21st century.

Rawls argued, however, that it is still possible to find out parts that overlap between the multitude of circles with different centers and of different sizes. And he thought that international standards should draw on that common ground.

When it comes to war, for example, attacks on civilians will be seen as unjust and “great evils,” such as an atomic bombing, will not be tolerated.

While various interpretations are available for what Rawls intended to say, thoughts of the kind he gave to how peoples of diverse societies can live together are likely in more demand now, in this age of the so-called apolar world, than at any other time.

War, after all, victimizes ordinary people. Once we are at war, the lives and freedoms of individuals, and democratic processes, will all be put on the back burner.

To avert a repeat of the “story of self-destruction,” Japan and other small and midsize countries should strengthen their unity to expand the common ground of consensus at a time when major powers of the world are leaning toward a “me first” mentality.

And it also appears necessary to step up preventive diplomacy, which is about nipping conflicts in the bud.

Even when few overlaps are readily to be found between different circles, there should still be efforts of dialogue for linking corresponding nations, albeit with a fine thread, for starters.

However high-handedly Russia and China may be behaving over Ukraine and Taiwan, respectively, we have no choice but to seek to relax the tension and find a middle ground through down-to-earth diplomatic efforts.

The power of the common peoples has been taking a leading role in a growing number of domains since the beginning of this century.

Citizens and experts, for example, have worked together to step up the development of rules in moves to ban nuclear weapons and to fight climate change.

Solidarity of the sort among sensible members of the peoples should be further expanded.

We should take it once more to heart, not the least to achieve that goal, that peace and stability of society are maintained by a mechanism for guaranteeing the coexistence of diverse individuals.

Let us look back on ourselves to see if our current society is really warranting freedoms of speech and thought. Let us reflect on whether our political system is placing a foremost priority on the happiness of individual citizens.

Continual checkups of the democracy we are in will serve as a step toward expanding the common ground of a consensus for peace.