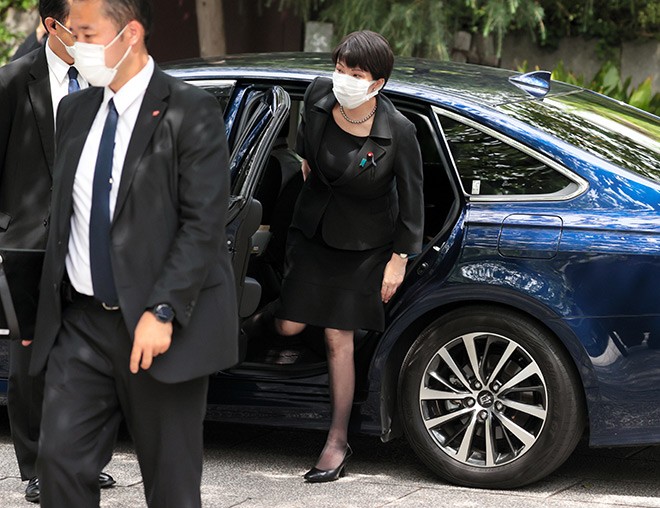 Current and former Cabinet members visited Yasukuni Shrine in Tokyo on Aug. 15 as Japan marked the 77th anniversary of its defeat in World War II.

Visits to Yasukuni by Cabinet members have sparked anger from South Korea and China, which view the shrine as a symbol of Japan’s past militarism.

The Shinto shrine honors 14 wartime leaders who were convicted as Class A war criminals alongside the war dead.

Sanae Takaichi, minister in charge of economic security, and Kenya Akiba, reconstruction minister, paid their respects at the shrine in Chiyoda Ward.

Other Diet members of the ruling Liberal Democratic Party who visited the shrine included Koichi Hagiuda, the LDP policy chief who was minister of economy, trade and industry before the Aug. 10 Cabinet reshuffle, and Shinjiro Koizumi, a former environment minister.

After his visit, Hagiuda told reporters: “I offered my heartfelt condolences to the spirits of our predecessors who sacrificed their precious lives in the war and renewed my vow to work for lasting peace.”

He added that he gave a cash offering to the shrine at his personal expense.

Koizumi would not respond to questions from reporters.

Prime Minister Fumio Kishida passed up a visit to Yasukuni. But an official visited the shrine to make a cash offering on Kishida’s behalf as president of the LDP.

The official said the offering was made at Kishida’s personal expense.

An all-party group of Diet members who visit Yasukuni Shrine together opted out of doing so because of the spread of the novel coronavirus.

On Aug. 13, Yasutoshi Nishimura, minister of economy, trade and industry, paid a visit to the shrine.

“I offered my prayers to the spirits of soldiers who were sacrificed in the war while they wished for the best for their country and loved ones,” he said in a Twitter post.

The Chinese Foreign Ministry said the visits illustrate afresh the Japanese government’s mistaken stance on the issue of their shared history.