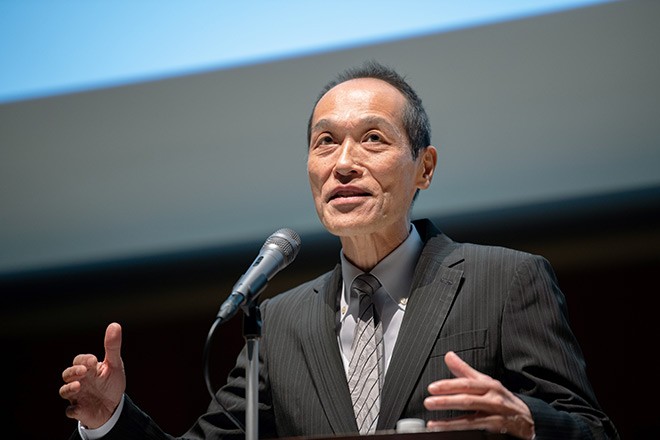 MIYAZAKI--Former governor and TV personality Hideo Higashikokubaru isn’t liking the view of his hometown from Tokyo and plans to run again for governor in this southwestern prefecture at the end of the year.

Higashikokubaru, 64, a former comedian, was elected as governor in January 2007 and served a four-year term before declining to run for re-election in 2011.

He told reporters on Aug. 7 in Miyazaki city where he was visiting for a lecture, “Looking at Miyazaki Prefecture from Tokyo, I had the impression that its ability to send out messages has relatively declined.”

He will officially announce his bid for governor at a news conference in Miyazaki city on Aug. 17.

Incumbent Governor Shunji Kono, 57, who served as deputy governor under Higashikokubaru, will seek his fourth term, he announced in November.

Higashikokubaru hails from the city of Miyakonojo in Miyazaki Prefecture.

He was an apprentice of well-known comedian Beat Takeshi, which is the stage name of film director Takeshi Kitano.

After working in the entertainment industry, Higashikokubaru won the Miyazaki governorship for the first time in January 2007, following the resignation of his predecessor over a bid-rigging scandal involving prefectural government officials.

During Higashikokubaru’s time in office, he took measures against an epidemic of foot-and-mouth disease in 2010 that killed around 300,000 cows and pigs.

Higashikokubaru also worked to raise the profile of Miyazaki as a major tourism prefecture through promoting sales on his own and introducing local products such as mangoes and homebred chicken on TV.

After leaving office in January 2011, he made a bid in the Tokyo gubernatorial election in April the same year but lost against incumbent Shintaro Ishihara.

In the Lower House election held in December 2012, Higashikokubaru ran on the Nippon Ishin (Japan Innovation Party) ticket and won a seat, which he resigned from in December 2013.

The Miyazaki gubernatorial election will be held on Dec. 25.

The Japanese Communist Party said it intends to field a candidate and is currently screening candidates.

(This article was written by Shogo Ohata and Hiroshi Ohno.)