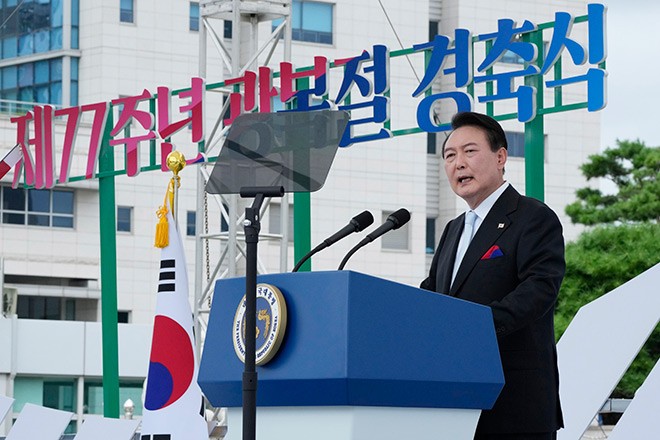 South Korean President Yoon Suk-yeol speaks during a ceremony to celebrate Korean Liberation Day from Japanese colonial rule in 1945 at the presidential office square in Seoul on Aug. 15. (AP Photo/Pool)

SEOUL--South Korean President Yoon Suk-yeol reiterated his willingness to improve bilateral relations with Japan on the 77th anniversary of his country’s liberation from Japanese rule.

“When Korea-Japan relations move toward a common future and when the mission of our times align, based on our shared universal values, it will also help us solve the historical problems that exist between our two countries,” Yoon said in his address at a ceremony marking National Liberation Day on Aug. 15.

Since he took office in May, Yoon has been working to improve bilateral ties with Japan, which are said to have deteriorated to their lowest level since the end of World War II, to coordinate their response to North Korea’s nuclear and missile programs.

The South Korean government set up a new consultative body in July comprising people from the government and the private sector to sort out the issue of former Korean wartime laborers.

In his Aug. 15 speech, Yoon said the Korean people in the past had to break free from the political control Japan imposed on them to “regain and defend our freedom.”

But he said Japan has become South Korea’s “partner” as they need to work together to counter threats to the freedom of global citizens.

He added that the two countries must contribute to the peace and prosperity of the global community through mutual respect between Tokyo and Seoul, as well as among their people, and wide-ranging cooperation in the economic, security, social and cultural arenas.

But Yoon did not touch on the issue of former Korean wartime laborers or other matters that have strained ties between the two nations.

He expressed his intention to implement an “audacious” initiative to provide large-scale support to North Korea to improve its economy and the livelihoods of the people if the country suspends its nuclear development and effectively shifts toward denuclearization.

Yoon also offered details on the plans for possible support to the North he first outlined at his inauguration ceremony in May.

They include building infrastructure for improved food supply and power generation, repairing ports and airports, providing technical assistance to boost the agricultural productivity and improving the medical infrastructure.