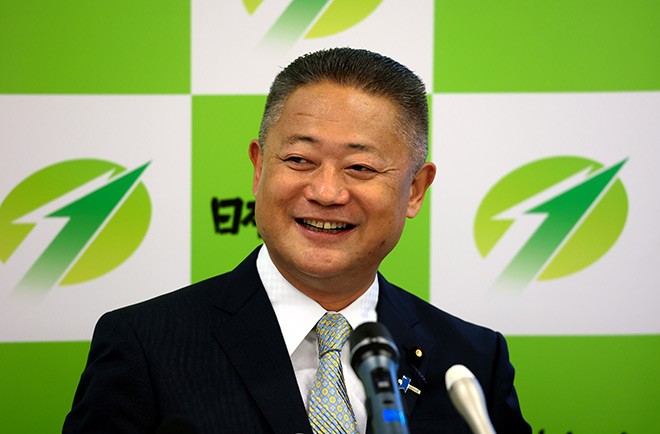 Nobuyuki Baba, Nippon Ishin’s co-leader, declares his candidacy in the party’s leadership election at a news conference in the Diet building in Tokyo on Aug. 2. (Koichi Ueda)

The new leader will be elected at an extraordinary party conference on Aug. 27, with around 600 “special members,” including Ishin lawmakers, and around 20,000 ordinary members each given one vote.

Osaka Mayor Ichiro Matsui has announced his resignation as leader of Ishin. He founded the party with Toru Hashimoto, former governor of Osaka Prefecture and former mayor of Osaka city.

Candidates were required to obtain recommendations from at least 30 special members.

Toyofumi Yoshida, a Lower House member who had intended to run, could not meet this requirement.

Currently, the conservative party is split over what direction it should take.

Matsui and others have tried to turn the party into a national force. Ishin has steadily grown in strength and appeared on the verge of becoming the largest opposition party in the Diet.

Ishin increased its Upper House presence in the July 10 election to 21 seats, but it failed to win representation for Tokyo or Kyoto, dealing a blow to its goal of becoming a national party.

Others in Ishin object to this approach, saying the party should place more importance on its roots in Osaka Prefecture.

Baba said he would be committed to make the party a national one if he becomes leader.

“I would like to make a start to become the largest opposition party, and then the ruling party in 10 years’ time,” Baba told reporters on Aug. 14.

“We need to turn our party into one in which Diet members and local assembly members are equal,” he said in a campaign speech on Aug. 14.

Umemura, the only female candidate, also campaigned on the streets that day, saying: “Ishin is not enjoying much support from women. (However,) there are policies that would appeal to them only through a female party leader.”

Ishin was formed in 2012 after evolving from an Osaka-based local political party called Osaka Ishin no Kai. Nippon Ishin entered national politics mainly on its flagship policy of restructuring Osaka city into a metropolis like Tokyo.

The “Osaka Metropolis Plan” policy was rejected in referendums in 2015 and 2020. Since then, the party has been unable to come up with another headline-grabbing initiative.

Matsui on Aug. 4 declared his support for Baba, saying he “would like to back (Baba) as the party’s next leader.”

Matsui’s effective nomination of Baba will likely have a significant impact on how party members vote.

Political observers say Matsui’s comment could also become a source of internal conflict because it halted attempts by some party members to field other candidates.

Osaka Governor Hirofumi Yoshimura, 47, who is also deputy leader of the party, quickly declared he would not stand in the leadership election.

Other Ishin lawmakers of the so-called Yoshimura generation, who are mostly in their 40s and entered politics through unified local elections in 2011, as Yoshimura did, also declined to run in the leadership race.

Matsui’s intention to resign was known before the Upper House election.

When asked on the night of the election if he would aim to succeed Matsui, Yoshimura told reporters, “I would like to focus on my work as (Osaka) governor and leader of Osaka Ishin no Kai.”

This month, he said he wanted specifically to tackle the spread of COVID-19 and other issues.

“There are many facilities for the elderly in Osaka. It’s also an economic city, so we need to both pursue economic growth (and halt the novel coronavirus),” he said.

He also expressed his hopes for the leadership race, saying, “Unless we are an organization in which new leaders can emerge one after another, we can’t fight the Liberal Democratic Party.”

However, few people expect the election to rejuvenate the party because Matsui has already publicly backed Baba.

A Diet member in the Yoshimura generation who thought about running in the election said Matsui wanted someone with the “ability to unite the party” as the new leader.

The Diet member admitted to lacking connections and experience that could unite Ishin’s lawmakers.

(This article was written by Taro Kotegawa, Chifumi Shinya and Tomomi Terasawa.)