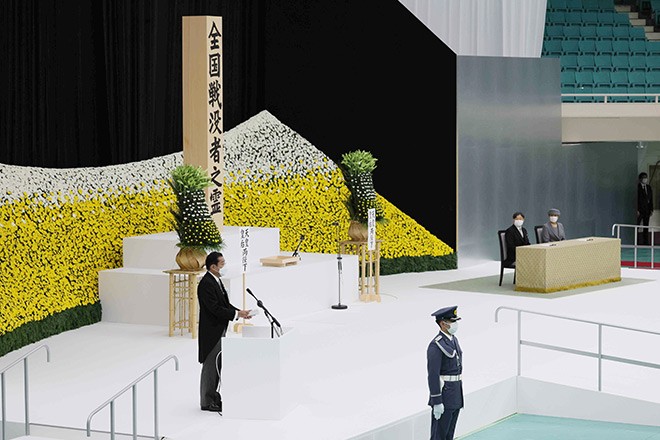 Prime Minister Fumio Kishida at a ceremony remembering the war dead at the Nippon Budokan hall in Tokyo on Aug. 15 (Pool)

Japan commemorated its war dead in a significantly downsized government ceremony on Aug. 15, the 77th anniversary of its defeat in World War II, as the novel coronavirus continues to rage throughout the nation.

About 1,000 people attended the ceremony at the Nippon Budokan hall in Tokyo, one-sixth the number in a usual year. The dignitaries included Emperor Naruhito, Empress Masako and Prime Minister Fumio Kishida.

Some 600 relatives of the war dead from across the country were present at the event, up markedly from last year’s record low of 53, when the country was in the grip of the fifth wave of infections.

Until the pandemic hit, about 5,000 relatives attended each year. Japan’s war dead are estimated at 3.1 million.

All attendees observed a minute of silent prayer at noon during the ceremony.

The emperor in his address said he earnestly hopes “the ravages of war will never again be repeated” while referring to “feelings of deep remorse” as he reflected on the nation’s past, just as he did in previous speeches for this occasion.

He also touched on the ongoing pandemic that continues to disrupt life across the country.

“While we are currently confronted with various difficulties caused by the spread of COVID-19, I sincerely hope that we all work together with a unity of mind to overcome this difficult situation and continue to seek happiness of the people and world peace,” he said.

Prior to the silent prayer, Kishida pledged to not have the horrors of war repeated and mentioned Japan’s efforts to push for “proactive pacifism,” an expression first used by then Prime Minister Shinzo Abe during the 2020 ceremony.

Kishida, however, did not refer to Japan’s responsibility for the war during his speech, following in the steps of Abe, who was assassinated last month, and Yoshihide Suga, his immediate predecessor.

The reference has been gone since the 2013 ceremony, after Abe took power for a second term. All preceding prime ministers up to that point had voiced their reflections on the nation’s wartime aggression and offered condolences to victims of other Asian countries.

Kenichi Otsuki, an 83-year-old man from Okayama Prefecture, gave a speech on behalf of bereaved families that described the hardships he endured after the war without his father.

He said his father, Katsumi, was sent to China and killed in the firefight in Hebei province. It happened just 16 days before Otsuki was born.

Kenichi, his mother and sister struggled to survive through farming, toiling in the field until late in the evening, when they would return to their unlit home.

“I remember crying with my mother when I was a young child, wondering why we have to endure such misery,” he said.

Before the ceremony, he noted that victims of war are still being produced in the world, such as in Ukraine, even 77 years after World War II.

He vowed to continue to speak about the tragedy that war brings and the preciousness of peace.

More than one-third of bereaved family members expected to attend the ceremony were born after the war, representing a generational change in attendees, according to the Ministry of Health, Labor and Welfare, which organizes the ceremony.

Of the relatives in attendance, 215 were born after the war, representing a record 36.3 percent and an increase of more than 10 percentage points from the ceremony five years ago.

The ministry also said only one spouse was expected to attend this year’s ceremony.

Spouses accounted for 10 percent of the relatives showing up in the 2000 event.

(This article was written by Tomoe Ishikawa and Akiko Tada.)