EDITORIAL: Kishida should express message of peace in his own words 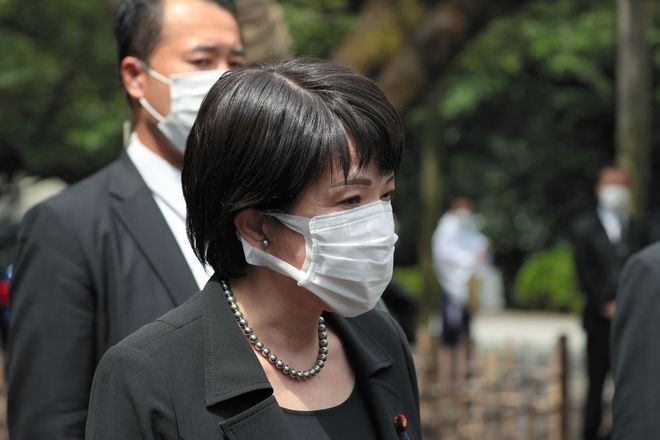 Sanae Takaichi, minister in charge of economic security, talks to reporters at Yasukuni Shrine in Tokyo’s Chiyoda Ward on Aug. 15. (The Asahi Shimbun)

On Aug. 15, the first commemoration of the end of World War II since Prime Minister Fumio Kishida took office, two members of his Cabinet visited Yasukuni Shrine in Tokyo.

Japan is facing the tricky challenge of how to respond to Russia’s invasion of Ukraine and mounting tensions in the Taiwan Strait as a nation upholding pacifist principles as the national creed.

Kishida didn't visit Yasukuni, but made a “tamagushi-ryo” cash offering as president of the Liberal Democratic Party at his personal expense.

As the nation’s political leader, however, Kishida should make clear his own views of the war, which led to Japan’s postwar pledge never to wage war again.

The fact that this practice has continued through three administrations probably reflects the growing clout of conservative members within the LDP.

Takaichi, who also traveled to the shrine on the end of the war anniversary while serving as internal affairs minister of the Abe Cabinet, said Aug. 15, “I offered my sincere gratitude with a sense of respect to the spirits of those who sacrificed themselves for the nation.”

Akiba, whose grandfather was killed in battle in China, also talked about “respect” and “sincere mourning” for the war dead.

There is nothing wrong about mourning war victims. But Yasukuni Shrine was the core facility for the wartime state Shinto, which supported Japan’s past militarism.

In addition, the shrine honors 14 wartime leaders who were convicted as Class-A war criminals in the Tokyo Trial, or the International Military Tribunal for the Far East, alongside the war dead.

Visits to the shrine by Cabinet members and other political leaders have different implications from the acts of worshipping at the place by bereft families and ordinary citizens.

Politicians should pay serious attention to the fact that their pilgrimages to the shrine are viewed by some as a sign that Japan has stopped feeling remorse over its wartime acts and is trying to justify its wartime past.

They should also remain aware of questions raised about their visits to the shrine from the viewpoint of the constitutional principle of the separation of religion and politics.

Kishida needs to express his strong commitment to efforts based on lessons from history to ensure that Japan will make an active contribution to restoring the international order and securing regional peace and stability. He is expected to unveil specific initiatives to achieve these goals.

But his speech at the Aug. 15 state war memorial ceremony was almost identical to those of Abe and Suga.

Since 1993, when then Prime Minister Morihiro Hosokawa offered “condolences” to victims in neighboring countries during the war, successive Japanese leaders demonstrated their awareness of Japan’s responsibility for harming people in these countries by expressing "remorse" and "condolences."

But Abe broke with this tradition after he returned to power in 2012. Suga and Kishida followed the example set by Abe.

Kochikai was long viewed as a liberal and dovish group within the LDP. As a Lower House member elected from Hiroshima, Kishida has expressed his devotion to the vision of “a world without nuclear weapons.”

At the Aug. 15 war memorial service, Kishida pledged to not repeat the horrors of war. But he cannot communicate his own commitment to peace if he only repeats the messages of his predecessors.