Some cities pay for dams but do not use them, documents show 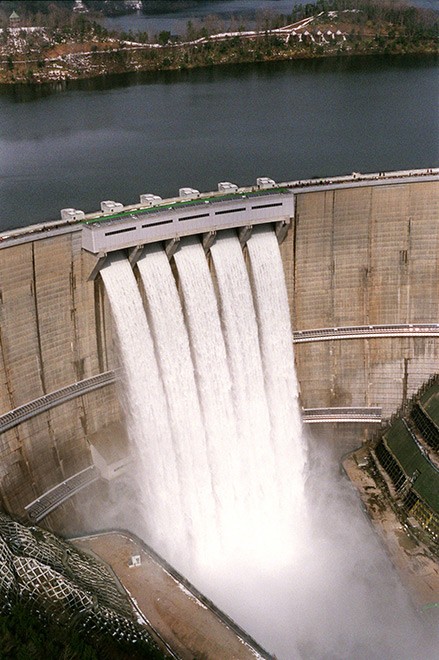 Eleven of the 71 water utilities that participated in government-led dam-construction projects to secure stable local water supplies have never actually collected any water from the dams, The Asahi Shimbun has found.

That is according to data obtained from a series of information disclosure requests made to public authorities.

The city of Hiroshima, which boasts a population of about 1.2 million people, was among the locales that built dams but never drew water from them.

Building them was not cheap.

The 11 water operators in question paid 57.6 billion yen ($432 million) to build their dams. On top of that, they pay annual costs of somewhere around 200 million yen to maintain and manage them.

The Asahi Shimbun conducted a survey of dams located in 60 areas across Japan that were at least a decade old as of October 2021.

The results revealed that the ones never used to collect water by the water utilities were all completed between 1986 and 2010.

The construction of most of these dams started in the 1970s or the 1980s, when Japan’s population was increasing.

Nine of the 11 water operators, including Sukumo in Kochi Prefecture, said in the survey that it had expected demand for water to continue to increase well into the future.

Higashikawa in Hokkaido and Nagai in Yamagata Prefecture, which rely on groundwater, said in the survey they took part in the dam construction projects to prepare for the eventuality that their local water supplies become depleted.

A law governing the use of multi-purpose dams requires a water utility that participates in a public dam-construction project to cover the costs for building it in proportion to the amount of water it expects to use from the embankment.

It also requires the utility to pay part of the costs for maintaining and managing the dam.

These 11 water supply operators have paid out annual maintenance and management costs--despite never using the water--to the tune of anywhere from several hundred thousand yen to upwards of 100 million yen, according to the survey.

Hiroshima city paid 36.5 billion yen, or 20 percent of the construction cost of Nukui dam in Akiota in Hiroshima Prefecture.

The government completed construction of Nukui dam in 2003 and Hiroshima city agreed to join the project to ensure a stable supply of water for its residents.

The city has paid around 100 million yen annually as part of the routine maintenance costs for its dam.

When it decided to take part in the project to build the dam in 1979, it had expected demand for water would only continue to rise as more and more people moved to the city.

It had forecast that, based on the increasing number of companies and residents in the city, it would eventually need as much as 680,000 cubic meters of water a day.

But the trend reversed.

Local demand for water has been falling since it peaked at 540,000 cubic meters of water a day in fiscal 1990.

But an official at the Hiroshima City Waterworks Bureau said it was not a waste because the city relies on Nukui dam as its backup water source.

“We are covering the dam’s maintenance costs in preparation for a natural disaster or water depletion,” said an official from Asahikawa in Hokkaido.

According to the Ministry of Health, Labor and Welfare, the amount of water used across Japan has been on the decline.

Ministry officials forecast that by 2040, water usage will drop to 30 percent less than what it was in 2000. That estimate is based on expectations surrounding Japan’s shrinking population and water conservation practices.

Kenichiro Fukuda, a consultant at the accounting firm EY Japan and an expert on water utilities, warned that other financial pressures on top of maintaining a dam will start to mount on local authorities.

“In addition to the costs of maintaining and managing dams, the need to renew aging water pipes will become a financial burden in the future,” Fukuda said. “Water operators should continue to make efforts to operate more efficiently, such as teaming with other local authorities.”

(This article was written by Eiji Zakoda and Yasuyuki Onaya.)