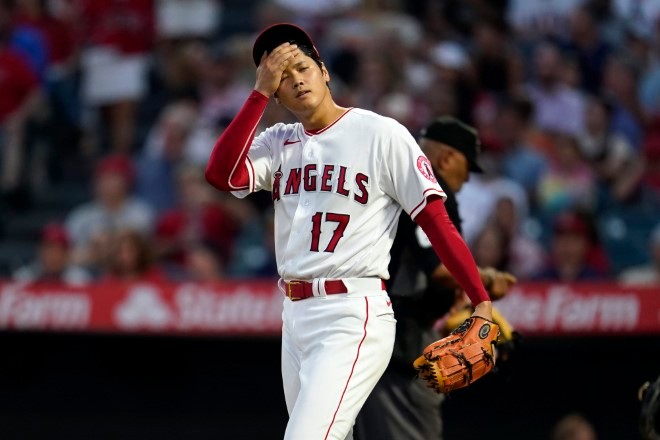 Jesse Winker and J.P. Crawford each had two hits and two RBIs for the Mariners, who vaulted over Toronto and Baltimore into the top wild-card spot in the AL.

Winker, who homered in the first inning, has reached base in 12 of his last 13 games and also has four home runs in that span.

It was the first time since May 18 at Texas that Ohtani had a no-decision. The Japanese two-way phenom had gone 7-5 with a 2.60 ERA in his last 12 starts.

The game was tied at 2 going into the ninth inning before the Mariners broke through. Sam Haggerty got aboard with a one-out single off Aaron Loup (0-4). Haggerty advanced to second when Angels catcher Max Stassi wildly threw to the bag even though Haggerty wasn’t running. Haggerty stole third and then scored the go-ahead run when he eluded a rundown and made it home when no one was covering the plate.

Seattle got some breathing room when Dylan Moore scored on Ty France’s grounder, when Stassi was unable to catch it at the plate. Julio Rodriguez scored on Winker’s grounder and Crawford’s base hit plated France.

Luis Castillo, making his third start since being acquired from Cincinnati at the trade deadline, struck out nine in six innings.

The teams traded two-out solo homers in the first. Winker went deep to right center on a full-count slider by Ohtani. It was the fifth time Ohtani allowed a home run in the opening frame and the first since he gave up a pair against the Yankees on June 2.

Rengifo tied it with the help of Seattle’s outfield. Center fielder Rodríguez tried to call off right fielder Mitch Haniger, but both players jumped at the ball in right-center. The ball bounced off Rodriguez’s glove and over the yellow line, giving Rengifo his eighth homer of the season. It was originally ruled a triple before being overturned by replay.

The Mariners took a 2-1 lead in the third when Crawford’s base hit up the middle drove in Winker. The Angels evened it in the fourth when Taylor Ward led off with a double down the left-field line and scored on Jared Walsh’s single to right.

Ohtani has 165 strikeouts, which is tied for fifth in the majors. That’s the third-most strikeouts through the first 20 starts of the season by an Angels pitcher, behind only Nolan Ryan, who had 211 in 1977 and 182 in 1973.

BACK TO THE SCENE

It was Seattle’s first game at The Big A since the teams were involved in a heated brawl on June 26 that saw 12 players or coaches suspended.

Angels interim manager Phil Nevin, who was suspended for 10 games by Major League Baseball, and Winker, who received a seven-game ban, talked on the field during batting practice.

The Angels and Mariners had a four-game series Aug. 5-7 in Seattle, where there were no fights.