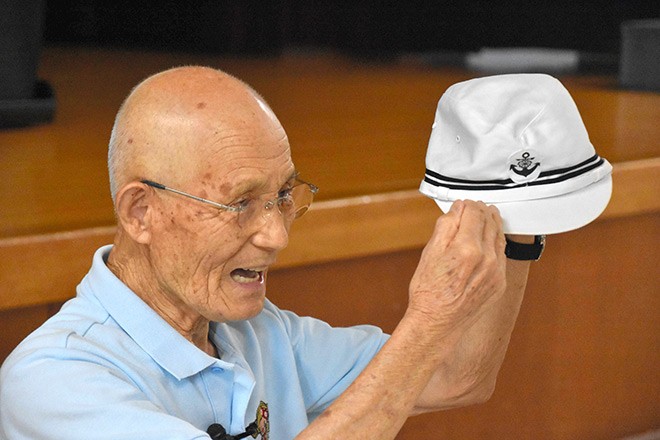 Yoshimune Shinohara shows a cap he wore when he was a member of the former Imperial Japanese Navy while speaking about his wartime experiences in Mito, Ibaraki Prefecture, on Aug. 15. (Hiroaki Takeda)

MITO--A former Imperial Japanese Navy member held by the former Soviet Union is being reminded of his plight amid the Russian invasion of Ukraine and the 77th anniversary of the end of World War II.

Yoshimune Shinohara, 93, who lives in Mito, Ibaraki Prefecture, said he recalls his bitter experiences when hearing about Ukrainians who have no choice but to immigrate to Russia.

In addition, the current war also reminds him of Japan’s invasion of China in the 1930s, which led to the Pacific War.

Shinohara spoke for roughly an hour about his wartime experiences in front of about 80 people at a gathering organized by Mito city on Aug. 15.

Shinohara was born in the village of Watari in the prefecture, which is now Mito’s Watari district. He volunteered to join the Imperial Japanese Navy in August 1944 when he was 15, and became a pilot trainee.

“Soldiers were decorated for killing people and carrying out suicide missions,” he told the audience. “This 15-year-old boy knew nothing about the reality of the war or the genuine fear of death. He believed that it was an honor to die for his country.”

Shinohara was dispatched to an Imperial Japanese Navy base on the Korean Peninsula in February 1945. He saw off fellow pilots leaving for kamikaze suicide missions while waiting his turn.

The war ended before he was called for a suicide mission. He learned about Japan’s surrender on Aug. 15, 1945, while he was conducting maintenance on a Zero fighter.

That was all he could tell the audience. He ran out of time to share the rest of his story.

After the war ended, Shinohara was detained by the Soviet Union and sent to an internment camp in a Moscow suburb.

He was forced to do hard labor outdoors even in the winter as the temperatures dropped to nearly 30 degrees below freezing.

Walking through knee-deep snow, he worked for eight hours a day cutting down trees into roughly 2-meter logs with another internee and piling them up.

The detainees were given only black bread and thin soup at mealtimes. Sometimes, they were provided these bare meals only once every two days.

The detainees would consume the ashes of burned logs as a substitute for medicine as they became all skin and bones after falling ill or suffering from malnutrition.

He would try to bury the bodies himself but had to leave them in the snow during the winter because he couldn’t dig a hole in the frozen ground with a pickax.

“I’ll bury you properly in the spring,” Shinohara would tell them.

He said other detainees would strip the dead of their clothing to avoid having anything useful go to waste.

After the end of World War II, the Soviet Union detained about 575,000 Japanese military personnel and civilian workers and 55,000 of them died before returning to Japan, according to the health ministry’s estimate.

Shinohara began sharing his experiences three years ago because he wanted to tell those who have not experienced war that he and others back then did not realize the preciousness of their lives and were even willing to stage suicide missions.

The Japanese government is considering increasing its defense budget following the Russian invasion of Ukraine.

Shinohara said he had one more thing he wanted to tell the audience on Aug. 15.

“We chose the path of renouncing the use of force to prevent any more war casualties,” he said. “We haven’t waged war for 77 years. That’s what Japan should be proud of. What should we do to continue on this path?”