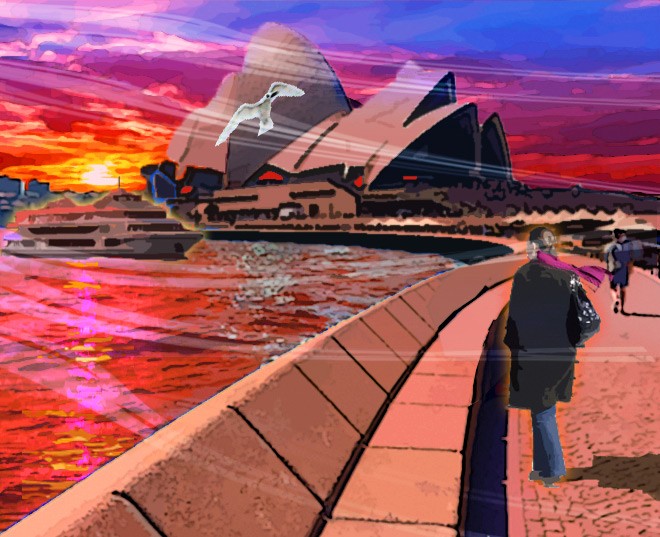 winter equinox--
in the small village
everything is ready for Inti Raymi
--Julia Guzman (Cordoba, Argentina)

The haikuist lives about an hour away from the Royal Observatory in Greenwich, London, where the world is split in half from east to west by the mean solar time that is counted from midnight. Lorraine Carey watched glowing hemispheres float past castaway islands in the coastal waters off Kerry, Ireland.

axis
on her lips
the smell of watermelon

Giordano was eager to begin a southbound journey away from Avigliano, Italy.

Satoru Kanematsu’s 7-year-old grandchild departed alone from Yokohama on a southbound Nozomi Shinkansen (a name that means hope). The boy was old enough in comparison to similar solo adventures chronicled in the children’s picture book “Hajimete no Otsukai” and television show with the same name, but grandpa nonetheless rode a roller coaster of emotions until he hugged the boy on the train platform near his home in Nagoya.

Teiichi Suzuki found himself in Osaka.

Lone traveler
I am a wandering cloud
that cloud is me

morning in my garden
the silver path
of a snail

Samo Kreutz looked to the east and then to the west before deciding which way to go.

crossroads...
a bumblebee leads me
into my inner self

This haiku by Francoise Maurice optimistically suggested that one cicada can make peace.

first cicada
in my thoughts
a world of peace

Evetts’s pet African Grey Dolly squawked after he lubricated a rusty line: after the oil silence.

Goldberg watched a spider that had trapped a fly in its web near the ancient Egyptian display in a museum, saying he “was impressed by the similarity.”

Jerome Berglund suggested global warming has everyone guessing about migration.

lapwings--
the movement
of long lenses

Fainzilber observed the cycle of life.

cranes in flight
an endless quest
for summer

Simona Brinzaru has heard the roaring noise of a tidal flood rushing into the mouth of the Amazon river, but she’s never heard the sound a snowstorm makes in her native Bucharest, Romania.

silent pororoca
the snow comes back
to the mountain

John Hamley lamented missing a chance to meet the indigenous wanderer Karapiru (prior to his July 16, 2021, death) whose story was documented by filmmakers in the Amazon. His name means hawk in the Awa language.

Sandra Simpson shivered at the sounds of new life.

Guzman suddenly shuddered with cold in the southern hemisphere. Worried for those who dressed in required recruitment suits, Aki Yoshida shivered through a cold morning in Sapporo, Hokkaido.

winter equinox--
the frozen smile
of an abandoned puppet

rolling chapatis
mom’s old dupatta flies away
from the clothesline

war news
her bridal phulkari
back in the closet

Ken Sawitri knows what the neighbors are preparing for dinner in Blora, Indonesia. Daipayan Nair warms to his mother’s cooking and writing in Silchar, India.

Peter Leroe-Munoz got used to the taste of Hawaiian scrambled eggs.

mother on board...
the boat capsized at
the crocodile crossing

a wild rose
in my small garden
how to tame it

Kanematsu wrote about the rewilding of gardens at deserted homes in his neighborhood. Tsanka Shishkova admired bright, loose-fitting cotton pullovers made in West Africa.

Eleonore Nickolay said her traveling friends sent “lovely photos, but one of them made me think of the excessive killing of African wildlife.”

Namibia
his smile on the selfie
with a stuffed lion

dusk--
an old rhino stumbles
to the arid water hole

Pravat Kumar Padhy may have fallen into a deep dream while resting under a tree.

Mona Iordan watched a documentary on the “amazing people” of Africa who “perform their traditional dance just to entertain.”

dancing with a Maasai
camera clicks accompany
another jump

on Uluru
the song of the aborigines
the camera’s clicks

Kreutz visited Ljubljana Zoo in Slovenia. Gilbertson encountered a red flyer and her joey. On a hot day in Tokyo, Frederick Kesner recalled the red landscape of the Australian Outback. Robin Rich hopped by an immigration and customs inspector.

wildlife park...
in a kangaroo’s pouch
my lullaby

Barbara A. Taylor spotted a nocturnal bird hiding inside a backyard tree on Mountain Top, New South Wales. Later, she may have been distracted by the sound of breaking glass from her china cabinet inside the house.

in the speckled trunk
a tawny frogmouth’s
camouflaged stare

Natalia Kuznetsova reflected on a mirror image in Moscow, Russia.

my cat always sees
a tiger in the mirror...
beastly vanity

Timely and timeless haiku. The next issues of the Asahi Haikuist Network appear on Sept. 2, 16 and 30. Readers are invited to send haiku about ripening grain, rippling wheat or reaping rice, on a postcard to David McMurray at the International University of Kagoshima, Sakanoue 8-34-1, Kagoshima, 891-0197, Japan, or by e-mail to (mcmurray@fka.att.ne.jp).