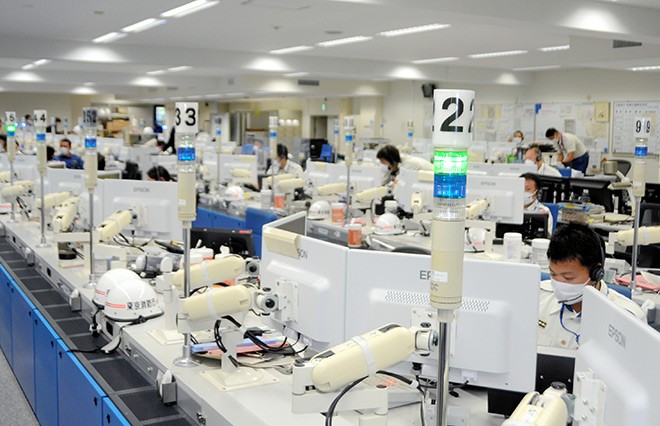 Emergency calls come in to the general communications center of the Tokyo Fire Department in the Otemachi district. (Yuji Masuyama)

Rescue workers in Tokyo say they are on the brink of collapse as they struggle to keep pace with the emergency calls made during the seventh wave of COVID-19 cases and the scorching heat.

On some days in the capital in July, about 95 percent of the ambulances in operation had all been dispatched mainly to transport infected patients or heatstroke victims to hospitals for medical care.

“There are still days when I am unable to return to my fire station between when I arrive there in the morning for work and well past midnight,” said one rescue worker of the Tokyo Fire Department.

And once the ambulance arrives at a hospital, it is inevitably called to its next location to pick up an emergency patient.

“I have to work 20 hours straight without time even for a short nap,” the rescue worker said.
For meals, the worker stops at a convenience store in-between emergency runs.

“If I need to spend time at the hospital to pass on information about the patient or to disinfect medical equipment and supplies, I have no time to eat,” the worker said.

Yuzo Fujino, a high-ranking official at the Tokyo Fire Department’s general communications center in the Otemachi district, said the green lights showing that an emergency call for an ambulance has been made rarely turn off these days.

“Based on all of my past experiences, things that normally do not occur are happening on a daily basis now,” Fujino said.

Computerized maps for the emergencies show that most ambulances are already out responding to calls.

Since July, that hectic atmosphere has continued from about 8 a.m. until close to midnight.

“We cannot allow the emergency call system to stop functioning,” Fujino said. “The staff are working furiously every day.”

But the huge influx of emergency calls has slowed down the response time of ambulances.

According to Tokyo Fire Department records, it took an average of 12 minutes, 6 seconds in July for an ambulance to reach the location where the emergency call was made. That was close to double the average of 7 minutes, 20 seconds for all of 2021.

To try to deal with the heavier workload, the Tokyo Fire Department has called on reserve vehicles to supplement the 275 ambulances regularly used.

But labor shortages have added another hurdle. Lacking enough rescue workers, firefighters have been asked to handle ambulance duties.

Another problem is that rescue workers themselves are not immune to COVID-19.

Of the 18,600 or so workers in the Tokyo Fire Department, 1,538, or close to 10 percent, were confirmed infected in July. Those who came in close contact with their infected colleagues were also told to not report to work.

(This article was written by Emi Iwata and Yuji Masuyama.)