International arrivals up only slightly after tourist ban lifted 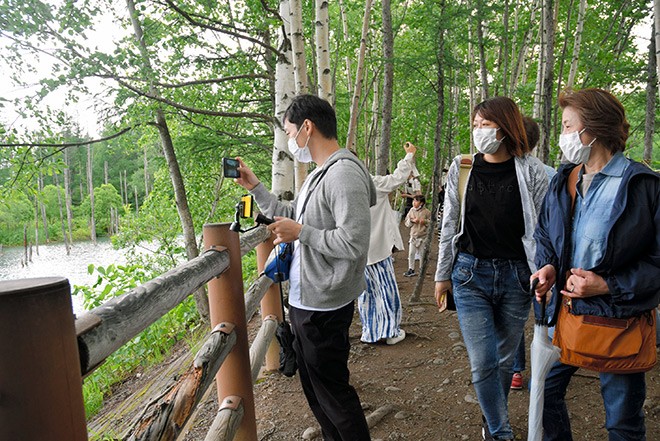 A tourist from Hong Kong, left, takes a picture at a popular pond in Biei, Hokkaido, on June 24. (Kazuya Miki)

Tourism officials said the number of overseas visitors has not increased significantly due in part to a resurgence of coronavirus cases in the country.

The Japan National Tourism Organization (JNTO) reported on Aug. 17 that there were only 144,500 foreign arrivals in July, including those who flew to Japan on business, to study, or through the Japanese government’s job training program for young people from developing countries.

That is a far cry from normal levels. The figure represented a decline of 95.2 percent from the same month in 2019, prior to the pandemic.

The July total included 7,903 tourists, after the government opened the doors on June 10 to group tours from countries and regions where infection levels remained subdued. It marked the first time in two years it let in tourists.

A JNTO official said several factors contributed to the dwindling tourism figures. They include the Omicron subvariant driving up COVID-19 cases across Japan, the stringent anti-coronavirus measures put in place at airports, and the government’s decision to only allow in tourists taking part in group tours.