Scientists find protein that can foretell severity of COVID-19 case 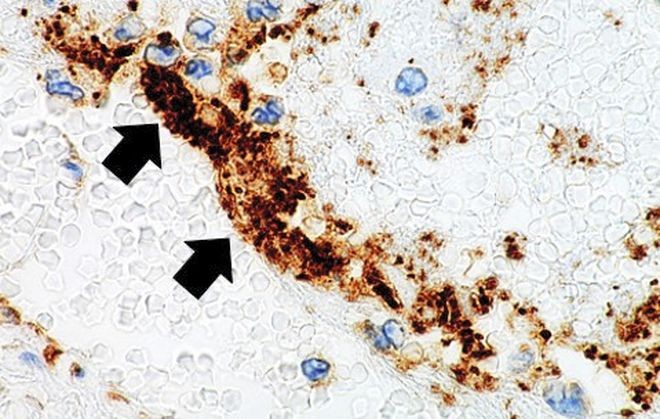 Myl9 attaches itself to the pulmonary blood vessels of patients infected with the novel coronavirus in the dark portions indicated by arrows. (Provided by Chiba University Hospital)

A team of Japanese researchers identified a protein that can foretell severe COVID-19 cases, potentially making it possible to determine the severity of a patient's symptoms.

Scientists from Chiba University said they discovered the protein--called myosin light chain 9 (Myl9)--rose in volume in blood vessels among patients with more serious signs of the novel coronavirus. Myl9 is one of the components that make up blood platelets.

The research was carried out primarily by a team headed by Kiyoshi Hirahara, an immunology professor at the university’s graduate school.

“If a simple kit could be developed that could measure the concentration of Myl9, the severity of patients’ conditions could be predicted,” Hirahara said at an Aug. 1 news conference. “That would help determine which patients to hospitalize first.”

Hirahara and his colleagues examined inflammation around the pulmonary blood vessels of individuals who deaths were due to COVID-19.

The researchers then found the virus damaged blood vessels, leading to the platelet-constituting Myl9 to swarm around blood clots generated in the process.

Analyzing the blood samples of 123 hospitalized patients from 11 medical centers, including Chiba University Hospital, the scientists discovered Myl9 levels were three to five times higher among those with moderate conditions than seen in mild cases.

It was 10-fold among patients who died of the virus.

Patients who showed higher Myl9 levels when they were admitted to hospital ended up being hospitalized for longer periods, according to the team.

Myl9 exists in the blood of healthy people but in only limited amounts.

According to the team, Myl9 levels among COVID-19 patients rise more markedly than in those with severe blood vessel problems, such as sepsis, and underwent cardiac and other surgical procedures that took a heavy toll on their bodies.