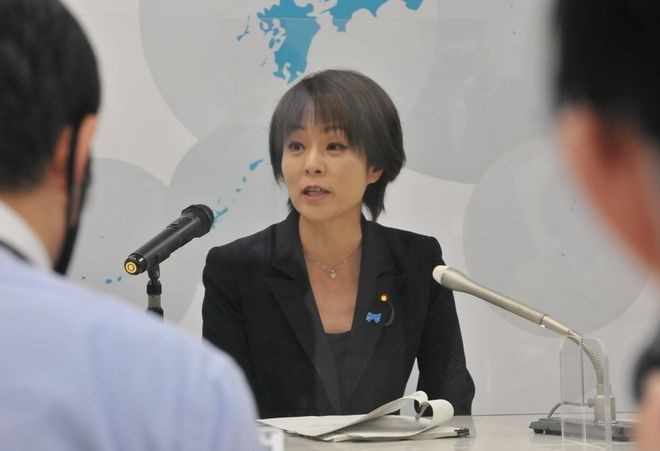 Mio Sugita, parliamentary vice minister for internal affairs and communications, at her inaugural news conference at the Ministry of Internal Affairs and Communications in Tokyo on Aug. 15 (Asahi Shimbun file photo)

In early modern Western paintings, an object that seems to fit perfectly and naturally into the composition may have been placed there deliberately to carry a message.

For instance, an apple represents wisdom, and a pair of scales stands for justice.

I am trying to figure out what message I should be seeing here.

In her contribution to a monthly magazine in 2018, Sugita took exception to providing administrative support to same-sex couples. She declared, “Those people don’t produce children. In other words, they are unproductive.”

Sugita came under fire, and the magazine in question was eventually forced to cease publication.

Her latest appointment probably carries the message, “There is no need to value diversity.”

During a Lower House plenary session, Sugita actually demanded that the basic law for a gender-equal society be scrapped, insisting, “Gender equality is an unethical fantasy that can never be realized.”

She based her argument on the fact that only women can bear children, but there is an undeniable gap in her logic.

A similar argument was employed before World War II to justify denying female suffrage, “Women have their mission to fulfill in the home before they can discuss affairs of the nation.”

This argument went unchallenged in the former Imperial Diet.

The post of a parliamentary vice minister is considered lightweight and suitable for younger lawmakers. But it is actually the third highest on the bureaucratic totem pole, only below the minister and state ministers.

If Sugita was judged right for the post, her thinking must have been approved by the Cabinet, too. Was Prime Minister Fumio Kishida aware of this?

Upon accepting her appointment, Sugita reportedly said, “I have never denied diversity in the past.”

She obviously has her own unique interpretation of the concept of diversity.

But, really, couldn’t anyone have prevented her nomination?