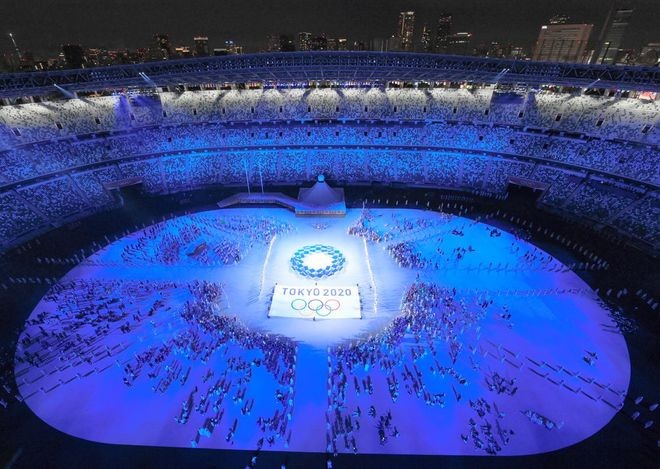 A logo and a flag of the Tokyo Olympics are seen during the Opening Ceremony for the Summer Games held at the National Stadium in Tokyo on July 23, 2021. (Asahi Shimbun file photo)

A former Tokyo Olympic organizing committee board member arrested on bribery allegations may have committed the shameless act of using the celebration of peace to feather his own nest.

We demand that law enforcement authorities get to the bottom of the facts.

The Tokyo District Public Prosecutors Office announced on Aug. 17 that it arrested Haruyuki Takahashi, who was a member of the Tokyo Organizing Committee of the Olympic and Paralympic Games Executive Board, on suspicion of taking bribes from a company.

Takahashi is accused of having received a total of 51 million yen ($378,150) in bribes from Aoki Holdings Inc., a business wear company, in exchange for helping the company win a sponsorship contract and the right to sell branded Olympic merchandise.

Takahashi, who previously served as a senior managing director of advertising giant Dentsu Inc., took a seat on the Olympic executive board in 2014.

In autumn 2017, a company headed by Takahashi signed a consultant contract with Aoki. Takahashi has reportedly told investigators that the money he received from Aoki was fees based on the contract and had nothing to do with the Olympics.

Prosecutors also arrested Hironori Aoki, the founder and former chairman of Aoki, along with two other former and current Aoki executives. They allegedly developed plans to bribe Takahashi to help the company gain what it wanted. Prosecutors seized related documents.

It is necessary to uncover all the facts about the Olympic business, including how Dentsu was involved in the process of selecting corporate sponsors and approving sales of official goods.

If the allegations are true, the organizing committee should also be held responsible for failing to detect the collusive ties between Takahashi and Aoki.

The committee collected a record 370 billion yen in contributions for Tokyo Olympics from domestic businesses. The committee was disbanded in June and now a liquidation company is winding up the affairs.

The liquidation company has issued a statement saying, “We are very surprised” at the arrests. But it should not be allowed to respond to these developments as if it had nothing to do with them.

The liquidation entity should work with Tokyo, the host city, and other relevant organizations to look into the sponsorship contracts and sales of official goods involving other companies as well for any violations or misconduct.

The Olympic Games are big-money events that tend to breed corruption. Tsunekazu Takeda, who served as Japanese Olympic Committee president until 2019, has been alleged to have paid bribe money to help Tokyo win the bid to host the 2020 Games.

But the JOC has done little more than a perfunctory probe into the allegations and is now preoccupied with supporting Sapporo’s bid to host the 2030 Winter Games.

It is hardly surprising that public support for the bid remains weak given that it is being promoted by an organization that is failing to make sincere responses to questions and doubts among the people and unwilling to take responsibility for scandals involving its members.

The International Olympic Committee’s Code of Ethics stipulates that “the Olympic parties or their representatives must not, directly or indirectly, solicit, accept or offer any form of remuneration or commission, nor any concealed benefit or service of any nature, connected with the Olympic Games.”

The Tokyo Olympics, which were forcefully staged despite the COVID-19 pandemic, underscored the reality that such basic principles of the Olympic movement as respect for human dignity, opposition to discrimination and good governance of organizations involved have been hollowed out.

The latest arrests have added another piece of evidence of the grim reality of the movement.