Performing arts plunged into crisis by 7th wave of infections 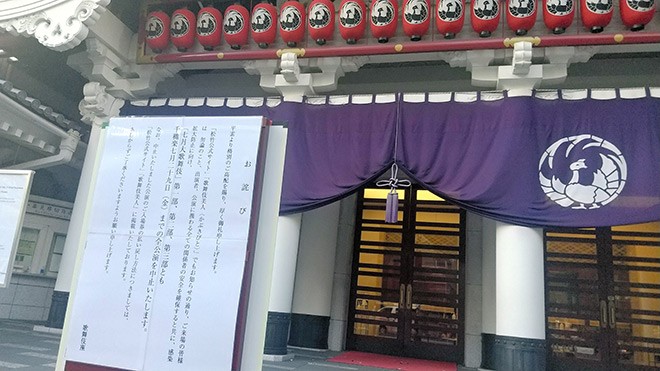 A notice at the Kabukiza Theatre in Tokyo’s Chuo Ward in July says all shows of “Shichigatsu Okabuki” have been canceled. (Aiko Masuda)

The latest COVID-19 wave has caused so much physical and financial damage to performing arts in Japan that some insiders fear the industry may cease to exist.

The number of virus-related cancellations of stage performances soared in July, and the situation hasn’t improved this month.

Organizers of the canceled shows are having a difficult time receiving compensation for the losses incurred under the existing relief setup.

The bleak situation was described at a symposium held on Aug. 1 by the Japan Performing Arts Solidarity Network.

“We had to postpone the opening day of the August performance, too, because some of us tested positive for COVID-19 during rehearsal,” one member of the group said.

Another said, “We are becoming a weak industry as the costs to stage performances are rising.”

The network consists of more than 240 promoters, production companies and theater companies.

In July, the group said, a total of 676 performances of 128 shows were canceled, around 4.7 times the monthly average for the period between January and June.

The performers usually do not wear facemasks on stage, so they are using other measures, such as taking COVID-19 tests, to prevent themselves from spreading the virus among their colleagues.

However, the novel coronavirus continues to rage across the country. And positive test results are increasing in the performing arts industry.

Tatsuya Ito, head of the Japan Performing Arts Solidarity Network’s secretariat, said if someone working for a stage performance tests positive, those in “close contact” will also take tests. And many of them, including asymptomatic people, have turned out to be infected.

“As a result, shows are forced to be canceled,” Ito said.

A kabuki show titled “Shichigatsu Okabuki” (July great Kabuki) was scheduled to be staged at the Kabukiza Theatre in Tokyo from July 19 to July 29.

But all performances were canceled after 66 people working for the show tested positive for COVID-19, according to production company Shochiku Co.

Eighteen of them took the tests after feeling unwell. The 48 others tested themselves because they had worked closely with the 18 people.

In the greater Tokyo metropolitan area, some performances of other shows, such as “Lion King” and “Bakemono no Ko (The Boy and the Beast),” both by Shiki Theatre Co., and “Miss Saigon” produced by Toho Co., were called off in July.

One insider in the theater industry says infections are also spreading in households, and producers are now fearful that actors or staff members may call from home saying they have a fever.

“I’m scared that someone might give me that call in the morning,” the insider said.

The cost for COVID-19 tests, which is at least several thousand yen per person, has become a financial burden on those in the industry.

The government has helped performing arts organizers continue their work during the pandemic under such initiatives as the “J-LOD” program of the industry ministry and the “ARTS for the future! 2” project of the Agency for Cultural Affairs.

However, these government programs will not provide compensation for canceled performances in the seventh wave because a COVID-19 state of emergency is not in place.

The culture agency’s program compensates for costs incurred as a result of cancellations in some cases if a canceled performance is rescheduled for dates within this year.

But people in the industry say that even booking a venue for a rescheduled date is difficult now because of the pandemic.