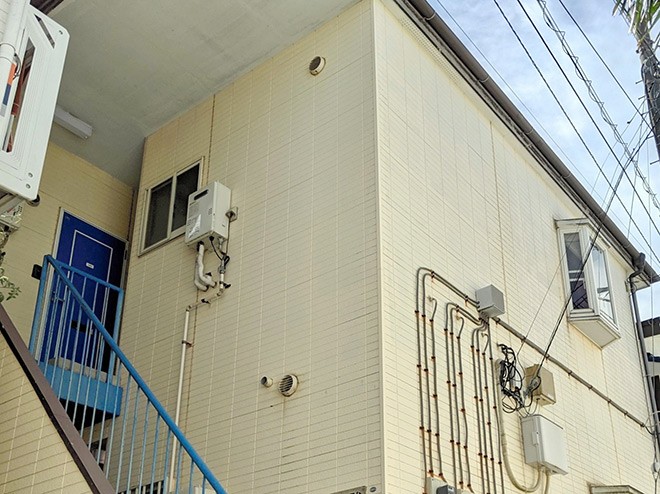 An older apartment building in the greater Tokyo metropolitan area purchased by an Australian investor in June (Provided by Nihon Agent Inc.)

A 40-something Chinese investor recently agreed to purchase a one-bedroom apartment in Tokyo at a "bargain" price between 30 million yen ($221,800) and 40 million yen.

But instead of living there, the buyer is taking advantage of the weak yen to make a timely investment.

“More foreign investors began looking for properties in Japan following the depreciation of the yen,” said Masahiro Kusanagi, an official of the real estate firm Nihon Agent Inc., which sold the apartment. “Some are selling their properties at inflated prices by taking advantage of the weak yen.”

Overseas investors are increasingly jumping on the recent sharp depreciation of the yen to purchase real estate properties in Japan at bargain prices.

Under the agreement struck at the end of July, the current occupant of the one-bedroom apartment in the four-year-old building in Tokyo will continue living there even after its owner changes. The investor plans to exchange yuan for yen before making the payment in a lump sum.

Nihon Agent reported receiving more inquiries from not only investors in the United States and China but also from those in Southeast Asia and the Middle East. Many of the firm’s customers are investing in Japanese properties for the first time, according to Nihon Agent.

Shenjumiaosuan, a website offering information on Japanese properties in Chinese, saw inquiries between April and June jump by 20 percent from the previous quarter.

That coincides with the rapid weakening of the yen. The yen was trading between 110 and 120 against the dollar until mid-March, but fell to around 130 against the greenback in April and weakened to 135 on June 13.

“The yen has dropped around 20 percent in value against the dollar since early this year,” said Ketsu Chou, president of Shenjumiaosuan Co., which operates the website. “That gives overseas investors (buying Japanese properties) a 20 percent discount. Now is the time to invest.”

The prices of Japanese properties on the website have risen about 10 to 30 percent in terms of the yen over the past seven years, but fell in yuan thanks to the recent depreciation of the Japanese currency.

Primary users of the website are Chinese in their 30s to 40s, most of whom buy one-room apartments in cash offered in the range between 10 million yen and 20 million yen each, according to the site operator.

Real Estate Japan, another real estate information website for non-Japanese, received about 200 inquiries a month from January to February, but the figure more than doubled in June.

Properties in metropolitan areas, such as Tokyo and Osaka, are popular on the website, while more site users are inquiring about those in Hokkaido, Okinawa and other resort areas.

Overseas investors are also aggressively buying up hotels and offices.

CBRE K.K., a major real estate service provider for corporations, surveyed foreign investors, including companies, at the end of last year and found 74 percent of respondents were planning to invest more in 2022 than they did the previous year.

Data compiled by CBRE shows that overseas investors spent more than 1 trillion yen annually for buying Japanese properties for the third consecutive year. The figure is expected to reach around the same level this year as well.

“Foreign investors look at a difference between yields on profits from properties and borrowing rates when buying properties,” said Hiroshi Okubo, a CBRE official in charge of the firm’s research business. “Demand is high for Japanese properties because the Bank of Japan is maintaining its ultra-low interest rate policy amid overseas rate hikes.”

Okubo added that such a situation tends to trigger a further drop in the value of the yen, which could help drive up the prices of Japanese properties in the domestic currency.