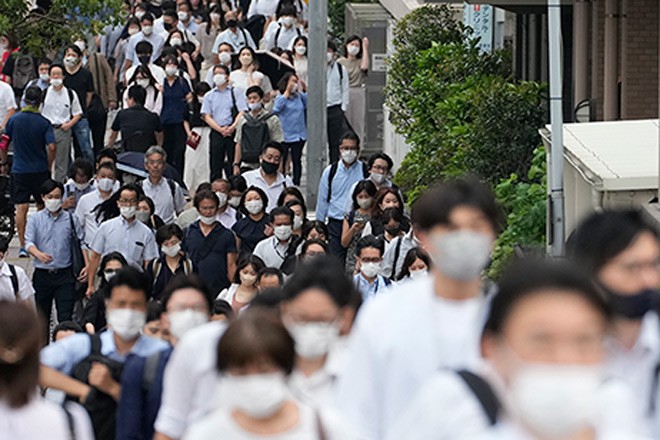 Face masks are the norm for pedestrians as seen during the morning rush hour in Tokyo on July 22. (AP Photo)

At least 21 prefectures reported single-day records as of 6:30 p.m.

Tokyo’s latest tally was down 3,794 from a week ago, marking the third straight day of a week-on-week decline.

The 27,453 new cases include 2,024 cases where samples were brought in from outside the capital for testing or positive test results were registered at centers outside Tokyo.

Officials also reported the deaths of 27 patients in their 60s to 90s in the capital.

The daily average of new cases over the week through Aug. 18 in Tokyo was 24,347, or 82.1 percent of the average for the preceding week.

The Tokyo metropolitan government said it would consider asking the central government to issue a state of emergency for the capital if the occupancy rate of beds for seriously ill patients was between 30 and 40 percent.

Their number dropped by two from the previous day to 33 on Aug. 18.