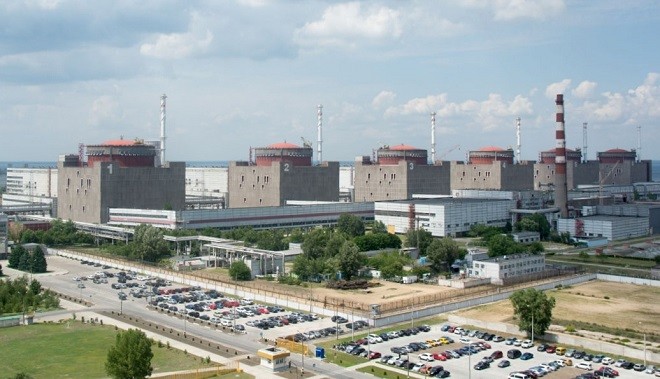 Russia’s occupation of a nuclear power plant in Ukraine and its deliberate use of the complex as a base for its war in the country shows a callous and reckless disregard for the horrors of nuclear pollution.

Russia should immediately cease this act of barbarism.

Areas around the Zaporizhzhia Nuclear Power Plant (ZNPP) in southern Ukraine have repeatedly come under shelling recently. Russia has been occupying the nuclear complex since about one week after it began its war of aggression against Ukraine.

With six reactors, the complex is the largest nuclear power plant in Europe in terms of capacity. In an extraordinary situation that has been in place for nearly six months, Ukrainian workers have been operating the plant under Russian control.

Russia bears grave responsibility for the risk of a major nuclear accident.

Missile attacks on the complex have intensified this month. Some missiles have struck near a dry storage facility where casks of spent nuclear fuel are kept at the plant, according to Ukraine.

Even if the reactors themselves are not damaged, a leak of spent nuclear fuel or a power shutdown would trigger a nuclear disaster. Actions must be taken immediately to avert such a nightmare.

The crisis at the plant has deepened because the war situation has changed significantly in recent weeks. The Ukrainian military is stepping up its offensive in the lower Dnieper River, which runs near the plant, in efforts to take back areas controlled by Russia.

There have been reports that Russian forces have been launching attacks from within the complex to counter Ukraine’s offensive.

Whoever is responsible for the attacks threatening the ZNPP, there is no denying that Russia’s continued occupation of the compound for its military operations is creating an extremely dangerous situation.

Russia’s aggression against Ukraine itself is a clear violation of international law. Not only that, an international treaty clearly stipulates that parties to armed conflict have the obligation to avoid putting the safety of a nuclear plant at risk.

Some experts say Russian forces have been holing up in the nuclear plant to avoid being attacked while using the facility as a base for its own attacks. This is simply an act of sheer insanity.

The Russian military also temporarily occupied the Chernobyl nuclear plant, the site of the 1986 nuclear disaster. It has been revealed that Russian soldiers may have been exposed to radiation as they behaved in a reckless manner at Chernobyl.

The International Atomic Energy Agency and U.N. Secretary-General Antonio Guterres have expressed deep concerns about the urgent threat to safety. A total of 42 countries including Japan, the United States, South Korea and European Union members have issued a joint statement calling on Russia to immediately withdraw its troops and personnel from the ZNPP.

Turkey, which has been eager to broker a cease-fire deal between Russia and Ukraine, is among the countries that signed the statement. It is not surprising that many nations are upset about Moscow’s use of a nuclear plant for military purposes, which poses a serious threat to the environment and human lives.

Russia has refused to admit its fault. But it should at least accept the fact-finding mission’s visit to the plant demanded by the IAEA.

What is transpiring at the ZNPP is also underscoring the huge risk posed by a nuclear plant during armed conflict. We have no choice but to come to terms with the reality that there is a limit to the power of international norms in the face of such a situation.

This is a reality that should be kept in mind when Japan and other countries consider the future of their energy and security policies.