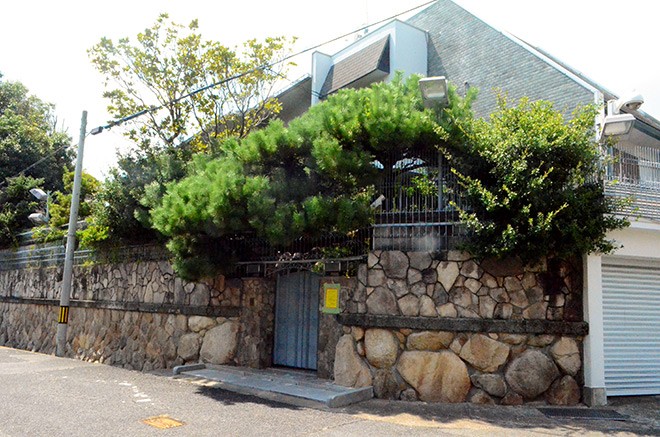 A yellow sign on the outer wall of the Kobe headquarters of the Yamaguchi-gumi says the facility is off-limits to gang members. (The Asahi Shimbun)

The romanticized notion of gangsters’ unshakeable loyalty to their bosses has gone by the wayside as internal battles erupt over ownership of gang offices.

Law enforcement sources said the continuing crackdown on organized crime has put many gangs in financial hardship, and both dons and their minions are fighting for a piece of what’s left, particularly the valuable real estate.

Last year, a yakuza boss in western Japan sued his former mentor over the gang office. The old boss had filed papers to transfer ownership of the office to a company headed by one of his relatives.

The current boss argues that the office was purchased through cash distributions of gang members, so it rightfully belongs to the entire gang.

Investigative sources said the current and former bosses have been in an adversarial relationship from a number of years back. The tension appears to have come to a head over the office.

The company being sued claims it has bought the real estate. It also argues that yakuza gangs are not democracies where every member has a say. Instead, the company says, the decision by the boss is everything.

Police sources said it had been rare for gang members to go to court to resolve what are in a sense domestic spats. However, similar problems are emerging at other gangs over their offices.

An investigative source pointed to trouble that arose in Osaka Prefecture.

The widow of a yakuza boss who died about 10 years ago sued the current boss, demanding ownership of the gang office as well as rent for the past decade on the grounds she inherited the office.

The source said that in another case in Osaka that did not go so far as a lawsuit, a widow decided to demolish the old gang office. Her late husband’s gang has now moved to the office of an affiliated gangster organization.

To avoid such office spats, gang bosses in recent years have transferred ownership to companies rather than leave the offices under their names.

The boss of one gang in western Japan died about 20 years ago, and his daughter inherited the office.

According to sources, she demanded the gang pay monthly rent of several million yen since the office was located in an entertainment district.

However, the gang members refused to pay, saying the boss himself did not put up all the money to purchase the office.

Another advantage of having a company own the office is that no inheritance tax has to be paid if the gang boss dies. The only paperwork required is to change the name of the directors of the company that owns the office.

One other thing the gangs could do to smooth things out is avoid taking any action that leads to stricter legal restrictions against them.

Under that designation, police could ban the use of the offices of affiliated gangs of the two crime syndicates.

One gang boss whose office could no longer be used said: “The very existence of the gang is at stake with the number of members plummeting.

But we still have to pay maintenance expenses for an office we cannot use. For small gangs, the only alternative is to sell it off.”

One source with the Osaka prefectural police said old-school gangs would rather keep their offices because they prefer face-to-face meetings over talks through internet teleconferencing apps or phones.

Atsushi Wada, a lawyer in Kyoto, said it was abnormal to allow “anti-social organizations” to boldly publicize their offices.

“By ensuring local residents can readily see their offices, the gangs apply silent pressure on society,” Wada said. “Gang offices will continue to exist as such threats until the gangs are exterminated.”