1,200 protesters gather in Tokyo to oppose state funeral for Abe 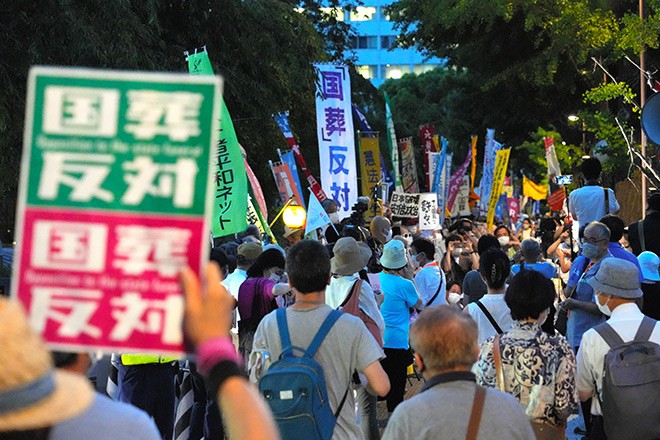 An estimated 1,200 people took to the streets of Tokyo on Aug. 19 to protest the planned state funeral for slain former Prime Minister Shinzo Abe, organizers said.

The government plans to cover all the expenses for the proceedings scheduled to be held at the imposing Nippon Budokan hall in the capital’s Chiyoda Ward on Sept. 27.

Prime Minister Fumio Kishida cited Abe’s tenure as the nation’s longest-serving leader as the reason a state funeral was warranted. Abe was gunned down July 8 while giving a campaign speech in Nara for the Upper House election that was held July 10.

Protesters held up signs opposing the state funeral, which they called outdated.

Ken Takada, 77, a co-leader of the committee that organized the protest, said, “There is a plan to hold the state funeral even though public opinion surveys show that more than half of respondents oppose the plan.”

A 40-year-old company employee from Chiba Prefecture who took part in a protest for the first time said, “I came to raise my voice because I felt that if the state funeral was held while I remained silent that would be the same as if I had consented.”

A 77-year-old woman from Tokyo’s Meguro Ward pointed to several scandals that dogged Abe, including allegations about favorable government treatment for the Kake Educational Institution and Moritomo Gakuen.

“The state funeral would be a way to place a cap on criticism of such scandals and force the public to praise” Abe, she said.

In the meantime, lawsuits were submitted in Hokkaido, Kyoto, Osaka and Hyogo on Aug. 19 by lawyers and citizens to prefectural auditors asking that they not release public funds to allow governors and prefectural assembly chairs to attend the state funeral.