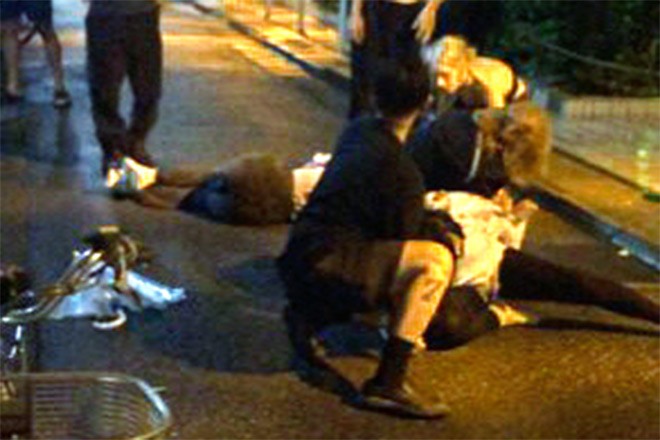 A girl in a white top, right, is overpowered after she attacked two women in Tokyo’s Shibuya Ward on Aug. 20. (Provided by a worker at a nearby restaurant)

A 15-year-old girl arrested over a random stabbing in a busy area of Tokyo that left a mother and her daughter with serious injuries told police she carried out the Aug. 20 attack because “I wanted to get the death penalty.”

The assailant, a third-year junior high school student who lives in Toda, Saitama Prefecture, was arrested at the crime scene in the Shibuya district on suspicion of attempted murder.

“I wanted to get death penalty, so I tried to kill two women that I happened to run into,” the girl was quoted by police as saying.

The victims, a 53-year-old part-time worker and her daughter, 19, sustained injuries that will take three months to heal, police said.

The mother suffered injuries to her shoulder, stomach and back, while her daughter was stabbed in the back and arm.

Police said the assailant approached the pair from behind while they were walking on a street and stabbed them with a kitchen knife.

The incident occurred around 7:20 p.m. on a narrow street lined with restaurants and houses near Shinsen Station on Keio Corp.’s Inokashira Line.

The mother was able to overpower the student and handed her over to the police when they arrived after being alerted to the incident.

Aside from the kitchen knife used in the attack, police said the girl had two knives in her pocket.

A female restaurant worker near the crime scene said she and a male colleague went outside after hearing what sounded like a quarrel.

They saw the mother overpower the girl. The male worker pitched in and seized the girl’s knife.

“This girl has a knife. Help,” the mother shouted. “Who are you?” she screamed at the girl. “I will never forgive you for mistaking us for somebody else.”

A young woman who appeared to be her daughter lay motionless nearby on the street.

The female restaurant worker said the perpetrator appeared to be about 150 centimeters tall and was shoeless.

While she was being held down, the girl asked the female restaurant worker if the young woman was dead.

The girl did not put up any resistance, the worker added.

(This article was written by Ryo Oyama and Soichi Tsuchidate.)