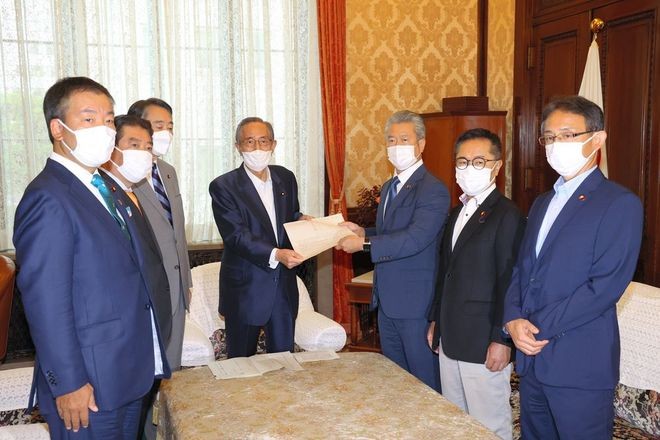 Lower House Speaker Hiroyuki Hosoda, center, receives a document calling for convening an extraordinary session of the Diet from representatives of the opposition parties on Aug. 18. (Asahi Shimbun file photo)

They include a series of revelations about the relationship between politicians and the Unification Church, now formally known as the Family Federation for World Peace and Unification, and the plan to hold a state funeral for slain former Prime Minister Shinzo Abe, which has bitterly divided public opinion.

Other issues include rising prices and the raging seventh wave of COVID-19 cases, which directly affect the people’s lives and livelihoods.

The government should explain its policies concerning these issues and answer questions about them before the public.

Prime Minister Fumio Kishida should convene an extraordinary Diet session as soon as he recovers from his infection with the new coronavirus.

Last week, opposition parties including the Constitutional Democratic Party of Japan, the Japanese Communist Party, the Democratic Party for the People and Reiwa Shinsengumi called on the Cabinet to convene an extraordinary Diet session.

The request was based on Article 53 of the Constitution, which stipulates the Cabinet must determine to convoke an extraordinary Diet session “when a quarter or more of the total members of either House makes the demand.”

This constitutional provision is aimed at ensuring that the Diet respects the opinions of minority groups and performs its role as the watchdog of the administrative branch of the government.

The Kishida administration convened an extraordinary session early this month following an Upper House election in July, primarily to choose the new president and the vice president of the chamber. Despite an opposition call for a sufficient period for the session to debate various issues, Kishida closed it after only three days.

The administration should not be allowed to continue avoiding debate on key policy issues with disregard for the importance of the constitutional principle.

Article 53 of the Constitution sets no time frame for convening a session. The previous administrations of former Prime Ministers Yoshihide Suga and Abe took advantage of this to ignore opposition requests for extraordinary sessions.

The Abe Cabinet convened a session 98 days after such a request was made in June 2017 but Abe dissolved the Lower House at the outset of the session for a snap election, precluding any substantial Diet deliberations on policy issues.

A group of opposition lawmakers and others have filed damages lawsuits against the government over this action, calling it unconstitutional.

The district and high court rulings on these suits have rejected the plaintiffs’ demand for state compensation without making any decision on the constitutionality of Abe’s action. But the rulings by the Naha and Okayama district courts contained an argument that should be taken very seriously.

The two district courts said the Cabinet has the “legal obligation” to convene a Diet session in response to such a request within a reasonable period of time. Its failure to do so could be judged unconstitutional depending on the circumstances, the rulings contended.

The Naha branch of the Fukuoka High Court has ruled that it is an “extremely important constitutional requirement” for the Cabinet to fulfill this obligation.

Both the Abe and Suga administrations showed a troubling propensity to avoiding debate on controversial issues and disregarding the importance of the roles of the Diet. The way they responded to opposition requests based on Article 53 of the Constitution symbolized this tendency of the two administrations.

When he announced his candidacy for the Liberal Democratic Party leadership election a year ago, Kishida said public trust, the very foundation of politics, was broken and the nation’s democracy was in crisis.

He promised to pursue “careful and tolerant” politics and stressed his “ability to listen.” If he still remembers his pledge, he should now demonstrate that his approach to politics differs from those of his predecessors.

Opinion polls show public support for his Cabinet has not been rising after the Cabinet reshuffle on Aug. 10, which Kishida described as a step to make “a fresh start,” with people taking an increasingly dim view of his administration.

This is why Kishida should now exercise his leadership in explaining the government’s policies and responding to questions and doubts among the public.