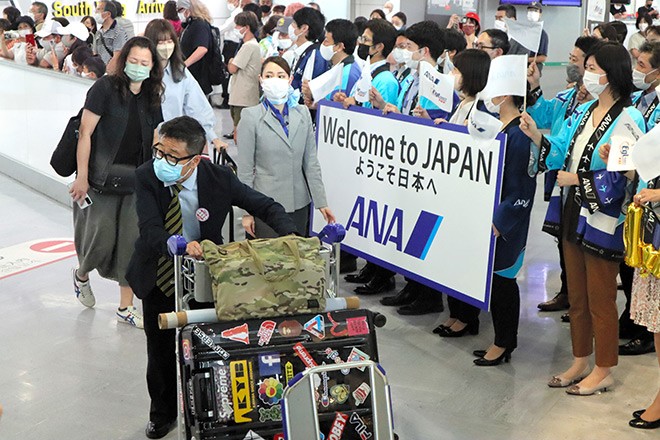 Currently, all arrivals to Japan, including Japanese nationals, are required to show proof of a negative result from a PCR test taken within 72 hours of their flight’s departure.

But Prime Minister Fumio Kishida said Aug. 24 that the testing requirement will be waived starting on Sept. 7 for travelers who show proof that they have received three shots of COVID-19 vaccine.

Under current rules, foreign tourists are only allowed to visit Japan by joining organized tours with conductors. The government will soon let in conductor-less group tours, the sources said.

They also said the daily maximum number of people permitted to enter Japan will be raised from 20,000 to 50,000.

“We will continue to establish a quarantine system, weigh in on the infection situation and will swiftly announce (a new policy),” Kishida said.

The Kishida administration had earlier considered relaxing the entry rules, but discussions stopped because of the seventh wave of infections.

However, businesspeople and those in the tourism industry have complained that Japan continues to impose the strictest border control policies among all G-7 nations.

Japan lifted its ban on sightseers from abroad in June, but fewer than 8,000 international tourists visited the country in July.