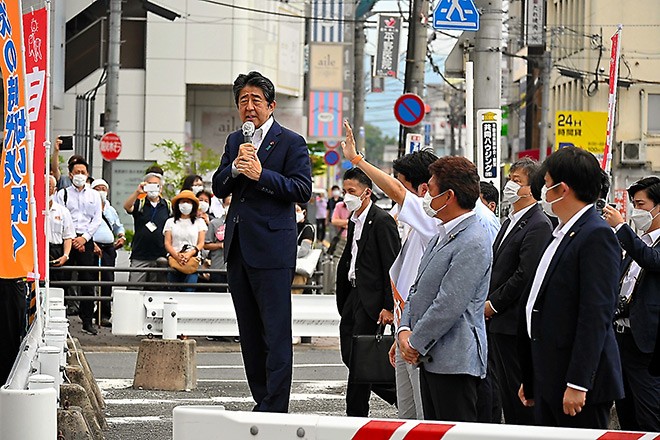 Former Prime Minister Shinzo Abe gives a campaign speech near the north exit of Yamato-Saidaiji Station in Nara shortly before he was fatally shot on July 8. (Mami Ueda)

Improved security planning and on-site protection afforded to former Prime Minister Shinzo Abe during a campaign speech in Nara city likely would have prevented his assassination.

That is a conclusion the National Police Agency reached in a report released on Aug. 25 about the shooting incident.

The NPA also has decided to strengthen its involvement in overseeing security plans rather than leave such duties up to prefectural police.

The report found fault both with the security planning and the actual security detail at the site in front of the Kintetsu Line’s Yamato-Saidaiji Station on July 8.

Regarding security at the scene, commanding officers did not call for backup when the police officer in charge of watching for suspicious individuals behind Abe was told to cover a different area.

That allowed the suspect, Tetsuya Yamagami, 41, to approach Abe from behind without any police officer noticing his movement.

The major fault with the security planning was placed on using a precedent without adequate consideration about its sufficiency.

Despite the possible danger from behind Abe, no consideration was given about dealing with it as the plan was passed up the chain of command for approval.

The plan itself was based on one compiled about two weeks earlier for a campaign speech given at the same location by Toshimitsu Motegi, the secretary-general of the ruling Liberal Democratic Party.

The decision was made to follow that plan because no major problems arose when Motegi spoke.

The report said the previous plan was followed without giving adequate consideration to whether security in the area behind Abe should be enhanced.

The report also included measures to prevent a recurrence. In the future, the NPA will assess the security plans for all individuals afforded such protection rather than the current practice of only evaluating security plans for sitting prime ministers.

The NPA will establish standards regarding the compiling of security plans and prefectural police headquarters will be required to submit reports based on those standards to the agency beforehand. The security plans will have to clearly identify the commanding officer at the scene as well as describe the deployment of uniformed police officers.

The NPA plans to hash out new regulations regarding security duties.
The agency dispatched a team of investigators to Nara on July 12 to assess the security provided for Abe. About 20 police officers, including some from the Metropolitan Police Department sent to Nara, were interviewed.

A total of 11 reports were submitted to the National Public Safety Commission, which oversees the NPA, and the final report of about 40 pages was compiled based on the discussions held between the two sides.