NPT review confab winds up without accord for the 2nd time 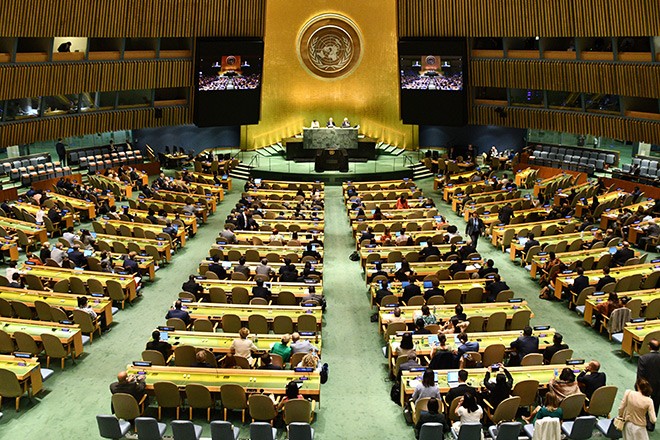 NEW YORK--Russian opposition kept parties to a review conference for the Nuclear Nonproliferation Treaty from reaching agreement on a final statement, the second consecutive time the proceedings have wound up inconclusively.

The start of the final day of the review conference here on Aug. 26 was delayed by four hours or so as diplomats strived to hammer out wording so an agreement could be reached.

Arms disarmament sources said Russia would not budge on its insistence that all references to Ukraine be deleted from the final document. That led to a breakdown in negotiations and no final statement was agreed upon.

At the previous review conference held seven years ago, no final statement was reached due to differences over a plan to make the Middle East a nuclear-free region.

The NPT regime itself now faces questions about its viability with the second straight failure to issue a final statement.

This year’s review conference was delayed by two years due to the novel coronavirus pandemic.

The review conference at U.N. headquarters began on Aug. 1, with the first week devoted to speeches by representatives of the participating nations. Prime Minister Fumio Kishida became the first Japanese leader to address the review conference when he spoke Aug. 1 and vowed that Japan would serve as a “guardian” of the NPT.

From the second week, three committees were set up around the three main pillars of the NPT: nuclear disarmament, nuclear nonproliferation and the peaceful use of nuclear energy.

Based on the discussions in the three committees, Gustavo Zlauvinen, who presided over the review conference, put together a draft of the final statement on the evening of Aug. 25.

Russia’s invasion of Ukraine in February not only shook up the national security environment in Europe but also added a new dimension to topics for discussion at the review conference.

While negotiations continued with the hope that a compromise could be reached to maintain the viability of the NPT regime, Russia in the end refused to consent to the final statement.