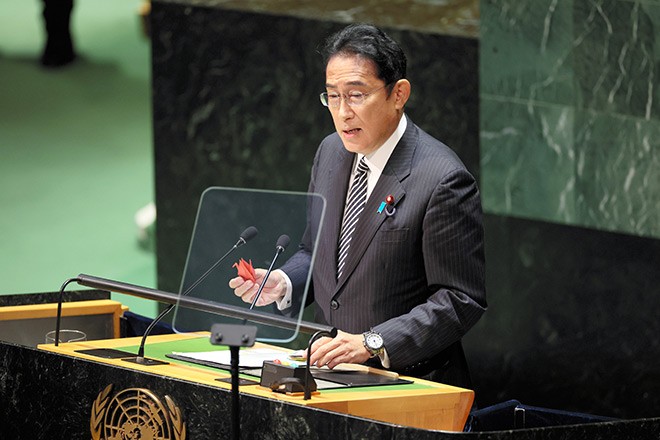 Prime Minister Fumio Kishida gives a speech at the review conference of the Nuclear Nonproliferation Treaty in New York on Aug. 1, holding a paper crane, a symbol of peace. (Asahi Shimbun file photo)

The failure of a U.N. nuclear disarmament review conference to adopt a joint declaration dealt a major blow to Prime Minister Fumio Kishida in light of his vow to help set the world on the path without nuclear weapons as an important goal of his administration.

After the monthlong conference of the Nuclear Nonproliferation Treaty ended inconclusively in New York on Aug. 26, Kishida laid the blame on Moscow, which had objected to any mention in the final statement of its war in Ukraine.

“It is extremely regrettable that a consensus (that signatories had worked to build) was not materialized due to opposition only from Russia,” he said. “Maintaining and strengthening the NPT is the only realistic path to a world without nuclear arsenals as the treaty is the cornerstone for the global nuclear disarmament and nonproliferation.”

Kishida had pledged to do his part to advance the nuclear disarmament process by going to New York to give a keynote speech on Aug. 1 when the conference opened, becoming the first Japanese prime minister to do so.

Japan opted out of joining the Treaty on the Prohibition of Nuclear Weapons, a pact that went into force in 2021, on grounds none of the nuclear powers had signed it. Japan relies on the U.S. nuclear umbrella for its security.

Instead, Kishida decided to focus his energies on the NPT review conference and dispatched Shunsuke Takei, the state minister for foreign affairs, to the conference to demonstrate Japan’s keen interest in the discussions.

Kishida represents a constituency in Hiroshima, which was destroyed by an atomic bomb on Aug. 6, 1945, ushering in the nuclear age.

The disappointing outcome of the review conference will likely force his administration to rethink its strategy to bring about a tangible result toward a nuclear-free world.

The question facing Kishida in the coming months is whether he can generate any visible outcome in his endeavors to help steer the world from nuclear stockpiles as the path toward it appears increasingly bleak, given international events this year alone.

The issue comes as the Japanese government will soon begin debate over a proposed steep defense buildup, citing the hostile international security environment.