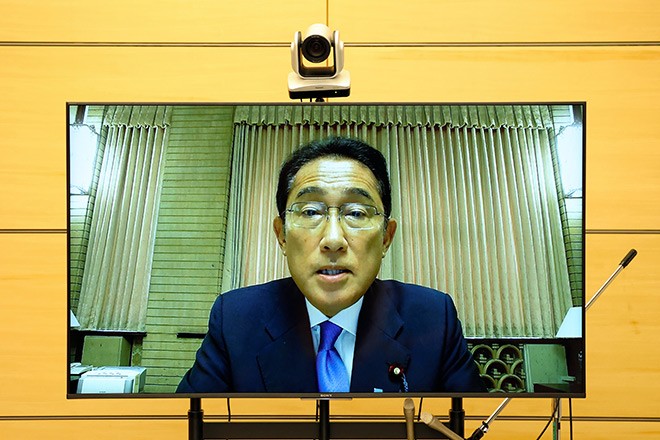 The disapproval rating for the Cabinet in the nationwide telephone survey conducted on Aug. 27-28 surged to 39 percent from 25 percent in the previous survey in July.

Ties between lawmakers of Kishida’s Liberal Democratic Party and the Unification Church were thrust into the spotlight after a gunman fatally shot former Prime Minister Shinzo Abe on July 8 reportedly over his relationship with the religious group.

Criticism against the church resurfaced following reports that the murder suspect felt that his life was ruined because the Unification Church had taken all the family’s money through his mother’s donations.

According to the survey, 21 percent of respondents highly rated Kishida’s response to issues related to the Unification Church, while 65 percent replied the opposite.

Among those who approved of the Cabinet, 48 percent of respondents were critical of the response, compared with 37 percent who gave Kishida high marks.

Among those who voiced disapproval of the Cabinet, only 5 percent rated Kishida’s response favorably, while 89 percent did not.

Kishida reshuffled the Cabinet on Aug. 10 to refresh the image of his administration amid growing controversy over the relationship between the LDP and the Unification Church, which is now formally called the Family Federation for World Peace and Unification.

“Even after the Cabinet was reshuffled, media reports emerged that new Cabinet members and senior LDP officials were linked to the church,” a high-ranking party member said. “As a result, the general public wondered what the reshuffle was for in the first place.”

The government and the LDP had rejected calls for an internal party investigation into the issue.

But after public pressure intensified, the LDP made an about-face on Aug. 26 and asked its lawmakers to report their Unification Church connections by Sept. 2.

Toshimitsu Motegi, secretary-general of the LDP, told the Asahi that he is taking the survey results seriously and is determined to work harder to resolve the issue.

“We want to meet the public’s expectations by working in full force to resolve a host of challenges facing us,” he said on the night of Aug. 28.

According to the survey, 82 percent of voters believe legislators should sever all relations with the Unification Church, while 12 percent do not think that is necessary.

Among LDP supporters, 78 percent are in favor of cutting all ties, while 18 percent said this move should not be required.

However, only 16 percent of all respondents believe that lawmakers can in fact dissolve their relationship with the church, while 76 percent feel that the ties may run too deep to sever, according to the survey.

Twenty-eight percent of LDP supporters feel the Diet members can maintain a distance from the Unification Church, while 64 percent said it would be impossible.

On the state funeral for Abe scheduled for next month, 41 percent of respondents were in favor of it while 50 percent were opposed.

The survey showed a gap between male and female voters, as well as younger and older age groups, on this issue.

Forty-five percent of men backed Kishida’s controversial decision to stage the taxpayer-funded event, which has been blasted as lacking solid legal basis, while 47 percent were opposed to the plan.

Among women, 53 percent were against holding the state funeral, compared with 37 percent in favor.

Sixty-four percent of voters aged 18-29 supported the state funeral, while 30 percent in the age group were against it.

The trend was the opposite among people in their 60s or older.

For the first time since Kishida formed his first Cabinet in October, the latest survey found that more voters were critical of the administration’s response to the novel coronavirus pandemic.

Forty-nine percent of respondents gave negative marks for the response to the health crisis, up from 34 percent in the previous survey, while 45 percent gave high marks, down from 57 percent.

Japan has been struggling to contain the seventh wave of new cases driven by an Omicron subvariant since July. For weeks, Japan has reported the world’ highest levels of new infections.

Regarding the government’s tentative plan to build new nuclear reactors, in part to replace aging units, 34 percent of respondents endorsed the strategy, while 58 percent were opposed.

Here again, a gender gap was found in the issue.

Among men, 44 percent backed a return to reliance on nuclear energy, while 50 were opposed.

Among women, 66 percent were against it, outdistancing the 24 percent who endorsed it.

It received 338 replies from 659 households with at least one voter for a response rate of 51 percent. Among the 1,419 mobile phone users with voting rights contacted, 660, or 47 percent, gave valid responses. The survey obtained a total of 998 valid answers.